Number of reported culture-confirmed and probable cases of infections caused by Shiga toxin-producing ''Escherichia coli'' O157:H7 and non-O157 serogroups per 100,000 population per year.

All age groups can be infected with Shiga toxin-producing ''E. coli'' (STEC), but young children, the elderly, and those with compromised immune systems are the most severely affected. STEC are very common bacteria that can cause diarrheal illness in humans. The illness can range from mild to severe, bloody diarrhea. These infections cause approximately 100,000 illnesses, 3,000 hospitalizations, and about 90 deaths annually in the United States. The bacteria live in the intestines of some healthy cattle, and contamination of meat can occur in the slaughtering process. Eating ground beef that has been inadequately cooked is a common way of becoming infected. Other sources of infection may include drinking unpasteurized (raw) milk or juice; drinking or swimming in water that is contaminated with sewage or animal waste; eating contaminated fruits or vegetables; or contact with animals that are infected. Severe manifestations of STEC infection (HUS or TTP) require a prolonged hospital stay and may result in renal failure and death. Effective prevention is the best treatment for STEC.

''E. coli'' O157:H7 infections became reportable in Utah in 1990; at that time, six cases were reported. The increase in the number of cases reported annually since 1990 may be due to improved reporting and better laboratory detection methods. In 2006, the number of Shiga toxin-producing ''Escherichia coli'' (STEC) infections per 100,000 Utah population per year (5.2) was nearly twice the 2005 rate due to a multi-state outbreak of ''E. coli'' O157:H7 associated with spinach; 18 laboratory-confirmed cases were identified among Utah residents associated with this outbreak. In 2009, one outbreak of ''E. coli'' O157:H7 occurred in Utah. There were 14 laboratory-confirmed cases identified as a part of this outbreak, yet the source of the illness was not determined. In 2011, there was a large outbreak of STEC associated with scout camps over the summer. In 2017, there was a severe outbreak of ''E. coli'' O157:H7 in which 7 Utah cases were ill and 2 cases resulted in death in southern Utah. As a nation, we met the national Healthy People 2010 target goal of improving incidence to less than or equal to 1 case per 100,000 person-years. The Healthy People 2020 target goal is 0.6 cases per 100,000 person-years. Data for 2019 shows the incidence of STEC in Utah was at 5.7 cases per 100,000 person-years. STEC rates have risen over the last few years. Much of this is likely due to improved testing methods including culture independent diagnostic tests (CIDTs).

''Escherichia coli'' O157:H7 has been nationally notifiable since 1994. National surveillance for all Shiga toxin-producing ''E. coli'' (STEC), under the name enterohemorrhagic ''E. coli'' (EHEC), began in 2001. As of January 1, 2006, the nationally notifiable diseases case definition designation changed from EHEC to STEC, and serotype-specific reporting was implemented.

Per the Communicable Disease Rule R386-702-3, health care providers and laboratories are required to report cases of Shiga toxin-producing ''E. coli'' to the Bureau of Epidemiology or the local health department. The Disease Response, Evaluation, Analysis, and Monitoring (DREAM) Program at the Utah Department of Health assists local health departments with the investigation of cases and outbreaks and implementation of control measures to prevent further cases. Because diagnosis solely on the basis of detection of Shiga toxin does not sufficiently protect the public's health, characterizing STEC isolates by serotype and whole-genome sequence (WGS) patterns is critical to detect, investigate, and control outbreaks. Screening of stool specimens by clinical diagnostic laboratories for Shiga toxin by CIDTs, and forwarding enrichment broths from Shiga toxin-positive specimens that do not yield STEC O157 to state or local public health laboratories are important for public health surveillance of all STEC infections. Local health departments attempt to interview every case of Shiga toxin-producing ''E. coli'' infection reported to public health. Information gathered during these interviews includes food history, water exposure, animal exposure, travel history, outdoor history, and contact with ill individuals. Data from these interviews are analyzed and used to identify outbreaks and common sources of infection. In addition, patients are provided with information on high-risk exposures and how to prevent future STEC infection in themselves and their families. [[br]] ''E. coli''-related illness can be prevented by following general guidelines, including: Practice proper hygiene, especially good handwashing. *Wash your hands thoroughly after using the bathroom and changing diapers. *Wash your hands thoroughly before and after preparing or eating food. *Wash your hands thoroughly after contact with animals or their environments (at farms, petting zoos, fairs, even your own backyard). *Wash your hands thoroughly before preparing and feeding bottles or foods to an infant or toddler, before touching an infant or toddler's mouth, and before touching pacifiers or other things that go into an infant or toddler's mouth. [[br]] Keep all objects that enter infants' and toddlers' mouths (such as pacifiers and teethers) clean. *If soap and water aren't available, use an alcohol-based hand sanitizer with at least 60% alcohol (check the product label to be sure). These alcohol-based products can quickly reduce the number of germs on hands in some situations, but they are not a substitute for washing with soap and running water. *Follow the four steps to food safety when preparing food: clean, separate, cook, and chill. *Wash fruits and vegetables well under running water, unless the package says the contents have already been washed. [[br]] Cook meats thoroughly. *To kill harmful germs, cook beef steaks and roasts to an internal temperature of at least 145F (62.6C) and allow to rest for 3 minutes after you remove meat from the grill or stove. *Cook ground beef and pork to a minimum internal temperature of 160F (70C). *Always use a food thermometer to check that the meat has reached a safe internal temperature because you can't tell whether meat is safely cooked by looking at its color. *Don't cause cross-contamination in food preparation areas. Thoroughly wash hands, counters, cutting boards, and utensils after they touch raw meat. *Avoid raw milk, unpasteurized dairy products, and unpasteurized juices (such as fresh apple cider). *Don't swallow water when swimming and when playing in lakes, ponds, streams, swimming pools, and backyard kiddie pools. [[br]] Visit [https://www.cdc.gov/ecoli/ecoli-prevention.html] for additional information.

Foodborne disease outbreaks and other outbreaks are investigated primarily by local health departments in collaboration with Utah Department of Health as needed.[[br]] [http://www.ualhd.org/]

All age groups can be infected with STEC, but young children, the elderly, and those with compromised immune systems are the most severely affected.

Rate of Reported Confirmed and Probable STEC Infections in Utah By Year, 2002-2019 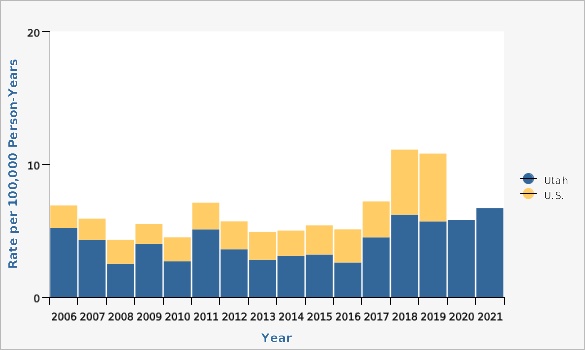 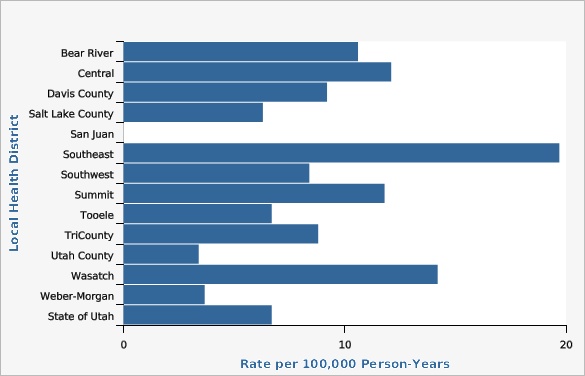 Page Content Updated On 10/20/2020, Published on 10/21/2020
The information provided above is from the Department of Health's Center for Health Data IBIS-PH web site (http://ibis.health.state.gov). The information published on this website may be reproduced without permission. Please use the following citation: " Retrieved Fri, 27 November 2020 11:08:24 from Department of Health, Center for Health Data, Indicator-Based Information System for Public Health Web site: http://ibis.health.state.gov ".