Number of Recreational Waterborne Disease Outbreaks (RWBDO) identified in Utah each year. A RWBDO is defined as a water exposure in which two or more persons have been epidemiologically linked to recreational water by location and time of exposure, and illness onset. Recreational water sources may include, but are not limited to, the following: swimming pools, hot tubs, spas, water parks, water play areas, interactive fountains, lakes, rivers, and oceans.

Number of RWBDOs identified in Utah.

These data are useful for expanding our understanding of the scope of waterborne disease, identifying important factors associated with unsafe or unhealthy recreational water, supporting public health recommendations, and encouraging improved water-quality policies and regulations.

Utah has not had any large recreational waterborne illness outbreaks in the past five years. The U.S. has seen an increase in RWBDO since 2007, but that may be due to increased surveillance.

Waterborne disease outbreaks are reportable in Utah. Local health departments investigate outbreaks to determine source of outbreaks, risks to the public, and to implement control measures. In response to the 2007 statewide ''Cryptosporidium'' outbreak, local and state public health implemented restrictions on swimming for persons in diapers, persons who had been ill, and persons who were still ill. It appears these restrictions helped stop the outbreak. A proactive education campaign and other prevention measures were implemented immediately following the end of the 2007 outbreak and continue to be implemented each year during the swim season (May through September). The weekly ''Cryptosporidium'' report is located here:[[br]] [http://health.utah.gov/epi/diseases/cryptosporidiosis/surveillance/index.html] [[br]] 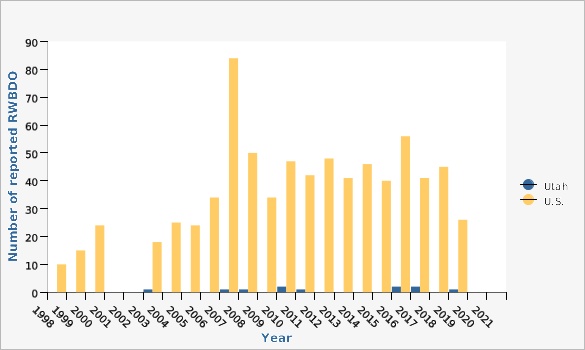 Page Content Updated On 10/20/2020, Published on 10/22/2020
The information provided above is from the Department of Health's Center for Health Data IBIS-PH web site (http://ibis.health.state.gov). The information published on this website may be reproduced without permission. Please use the following citation: " Retrieved Tue, 07 December 2021 12:15:59 from Department of Health, Center for Health Data, Indicator-Based Information System for Public Health Web site: http://ibis.health.state.gov ".