Greenhouse gases include water vapor, carbon dioxide (CO2), methane, and nitrous oxide, all of which play an important role in regulating the Earth's temperature. These gases help create the greenhouse effect, a process in which greenhouse gases absorb infrared radiation from the sun and contain the heat in the atmosphere.

Carbon dioxide emissions (as measured in millions of metric tons).

The design and layout of Utah cities and neighborhoods have a substantial effect on the health of all Utahns. Urban sprawl, inadequate public transportation, and energy-inefficient buildings not only affect human health but also have a distinct impact on climate change through the generation of greenhouse gas emissions. More greenhouse gases in the atmosphere, particularly carbon dioxide, will disrupt the balance between energy absorbed and energy emitted, causing greater amounts of heat to be trapped at the Earth's surface and ultimately increasing surface temperatures. Excess carbon dioxide emissions is strongly linked to human activities, primarily through the burning of fossil fuels. In fact, most greenhouse gas emissions in the United States come from energy use. Within the United States, carbon dioxide emissions from petroleum and natural gas represent 82% of the total man-made greenhouse gas emissions [1]. 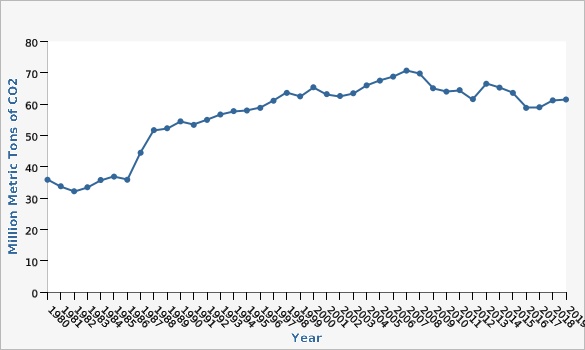 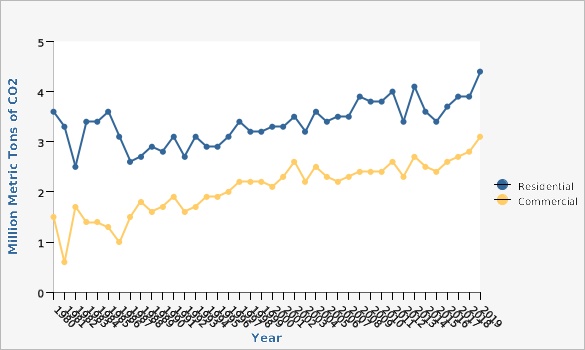 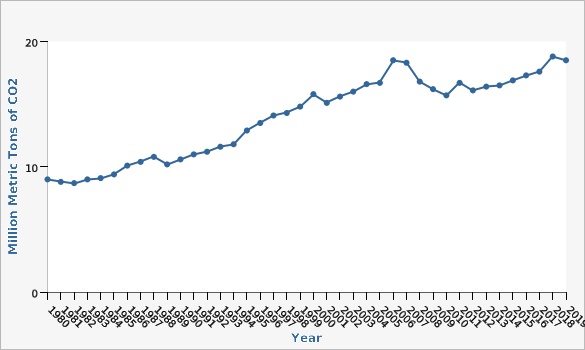 The location and interaction between highways, public transit, and roads affect driving behaviors, which affects the amount of carbon dioxide emitted into the atmosphere. As of 2006, 28% of total greenhouse gas emissions in the United States came from transportation, while 94% of those emissions were from carbon dioxide [1]. Commuting long distances to work, school, the grocery store, and other destinations require Utahns to rely on vehicles, which contributes to the generation of carbon dioxide emissions. Mixed-use neighborhoods (communities that integrate businesses and residential buildings), biking or walking, and utilizing public transportation are excellent strategies to reduce vehicle emissions. Yet, if community layouts do not promote alternative forms of transportation, technological advances for vehicles may help in reducing emissions. Strategies include the creation of low carbon fuels and improved vehicle design and technology [4]. A reduction in carbon dioxide emissions due to technological advances or decreased vehicle usage has an effect on human health. Alternative modes of transportation, such as walking or biking, provide needed physical activity and can reduce the risk for a variety of diseases. Furthermore, reduced carbon dioxide emissions can help prevent air pollutants from becoming trapped at the Earth's surface and causing respiratory infections and exacerbating asthma. Any reduction in vehicle-induced carbon dioxide emissions can help mitigate climate change and improve human health.[[br]] 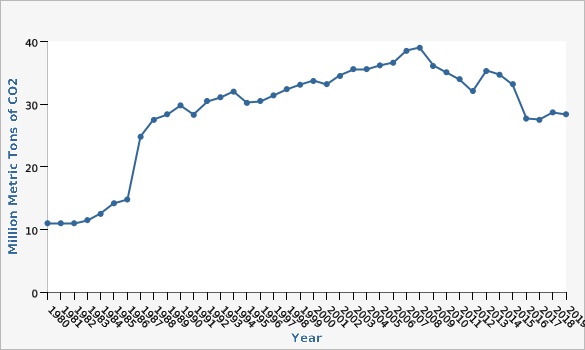 Fossil fuels are a common means to produce electricity. When these types of fuels are burned, they release greenhouse gases into the atmosphere. In Utah, approximately 98% of electricity production comes from fossil fuel-based power plants (coal, natural gas, and crude oil) [1]. Strategies to reduce greenhouse gas emissions from electric power include transitioning to renewable energy sources, making power plants more efficient, reducing demand for electricity in homes and industry, and Carbon Capture Sequestration and Storage [2].[[br]] 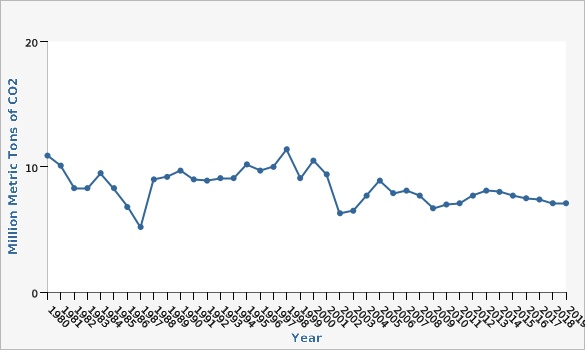 When industries make products, they can release greenhouse gases as part of the production process. Greenhouse gas emissions from the Industrial Sector has been divided into two categories: direct and indirect emissions [1]. The EPA defines direct emissions as greenhouse gases that are "produced by burning fuel for power or heat, through chemical reactions, and from leaks from industrial processes or equipment. Most direct emissions come from the consumption of fossil fuels for energy. A smaller amount, roughly a third, come from leaks from natural gas and petroleum systems, the use of fuels in production (e.g., petroleum products used to make plastics), and chemical reactions during the production of chemicals, iron and steel, and cement." [1] The EPA defines indirect emissions as greenhouse gases that are "produced by burning fossil fuel at a power plant to make electricity, which is then used by an industrial facility to power industrial buildings and machinery." [1][[br]] [[br]]

Page Content Updated On 05/20/2022, Published on 07/07/2022
The information provided above is from the Department of Health's Center for Health Data IBIS-PH web site (http://ibis.health.state.gov). The information published on this website may be reproduced without permission. Please use the following citation: " Retrieved Fri, 12 August 2022 5:52:49 from Department of Health, Center for Health Data, Indicator-Based Information System for Public Health Web site: http://ibis.health.state.gov ".