A cesarean delivery is a surgical procedure in which a fetus is delivered through an incision in the mother's abdomen and uterus.

Number of cesarean deliveries among low risk women (with full term, single, head down baby) with no prior births

Number of live births to low risk women (with full term, single, head down baby) with no prior births

"Low risk" refers to women giving birth whose baby is full term (37 weeks or greater), singleton (not a twin or other multiple-fetus pregnancy), and in the vertex or head down position. By framing the data in this way, eliminating higher risk pregnancies that are more likely to require a cesarean delivery, we can more accurately reflect increases in cesarean rates for women who have the least medical likelihood of needing a surgical delivery.

The World Health Organization (WHO) defines normal birth as "...spontaneous in onset, low risk at the start of labor and remaining so throughout labor and delivery. The infant is born spontaneously in the vertex position between 37 and 42 completed weeks of pregnancy. After birth, mother and infant are in good condition." The aim of the care in normal birth is "to achieve a healthy mother and child with the least possible level of intervention that is compatible with safety. In normal birth, there should be a valid reason to interfere with the natural process." In 1970, the United States had a cesarean delivery rate of 5%. This increased to 20.8% in 1997, and to 31.7% in 2019, when nearly one-third of all children in the U.S. were born by cesarean delivery. The increases are present in all age groups and for all races and ethnic origins, without identified concurrent sources of increased obstetrical risk. A controversial aspect of this discussion is cesarean delivery on maternal request (CDMR) at term for a singleton pregnancy in the absence of any medical or obstetrical indication. It is not possible to obtain a confident estimate of the rate of CDMR at this time. The increase in cesarean delivery is an issue of importance for all women, but even more so for first time mothers, as the trend is increasingly to schedule repeat cesareans for all subsequent births, once a woman has had one cesarean birth. This trend has implications not only for a woman's entire reproductive life, but also for infants and the entire health care system. Since a cesarean delivery entails major surgery for the mother, the following complications may occur (and may occur at a greater rate than for vaginal delivery): postpartum hemorrhage, infection, operative injury, thromboembolism, hysterectomy, anesthetic complications, placental problems in subsequent pregnancies (including placenta previa and accreta), postpartum depression, and increased risk of surgical complications in the presence of maternal obesity. Effects of cesarean delivery on the newborn may include difficulty with initiation of breastfeeding, prematurity and its sequelae, lacerations, and respiratory problems. Both mother and infant will experience longer and more costly hospital stays than after the normal vaginal delivery.

The Utah Department of Health has implemented the "Power Your Life" campaign to reach women of reproductive age about the importance of good health prior to pregnancy to improve outcomes. The centerpiece of the campaign is the Power Your Life website at http://poweryourlife.org/.

The American College of Obstetricians and Gynecologists published the "Safe Prevention of the Primary Cesarean Delivery" obstetric care consensus: https://www.acog.org/clinical/clinical-guidance/obstetric-care-consensus/articles/2014/03/safe-prevention-of-the-primary-cesarean-delivery

Evidence based practice guidelines for safe reduction of primary cesarean delivery can be found at:[[br]] [https://www.cmqcc.org/VBirthToolkitResource]

Women are advised to seek information on benefits and risks of vaginal birth after cesarean delivery, known as VBAC. Uterine rupture (cited as the main risk with a VBAC) is uncommon, approximately 1%, in women who labor and deliver vaginally in pregnancies following a cesarean delivery with a low transverse uterine incision. A prior cesarean with a vertical incision into the uterus is considered unsafe for any subsequent vaginal delivery. This needs to be confirmed by a surgical report from the cesarean surgery. Women are urged to discuss their desires for a trial of labor and VBAC with their health care providers. 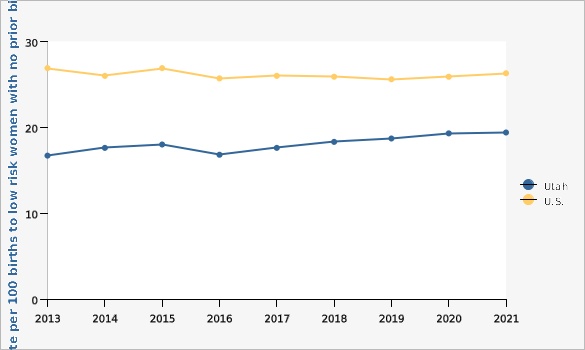 [[br]]"Low risk" refers to women giving birth whose baby is term (37 weeks or greater), singleton (not a twin or other multiple-fetus pregnancy), and in the vertex or head down position.

Page Content Updated On 11/04/2021, Published on 01/13/2022
The information provided above is from the Department of Health's Center for Health Data IBIS-PH web site (http://ibis.health.state.gov). The information published on this website may be reproduced without permission. Please use the following citation: " Retrieved Fri, 01 July 2022 5:48:29 from Department of Health, Center for Health Data, Indicator-Based Information System for Public Health Web site: http://ibis.health.state.gov ".