Percentage of infants who were fed breast milk for at least 12 months.

Number of mothers who indicated they were providing breast milk to their infant up to 12 months of age.

Infants who turned 12 months during the calendar year; number of mothers responding to survey.

Increase the proportion of infants who are breastfed at 1 year
U.S. Target: 34.1 percent

The Academy of Breastfeeding Medicine (ABM) affirms the following tenets: * Improved breastfeeding promotion, protection, and support are needed globally and at all levels, including increased support by physicians, other health workers and healthcare systems, schools, communities, corporations, and governments. The primary goal of the ABM is to educate physicians worldwide in breastfeeding and human lactation. Physician undergraduate and postgraduate medical education must include knowledge of the current evidence, instill the necessary attitudes, and provide experience in the skills necessary to fulfill their responsibility to promote, protect, and support breastfeeding. Medical professionals have a responsibility to promote, protect, and support breastfeeding in their practice of medicine according to at least three values of medical ethics: the ethical mandates of "beneficence", the principle of taking actions that benefit your patient, and that is in their best interest; "non-maleficence", that is, first do no harm; and "truthfulness and honesty", the principle of informed consent. * Breastfeeding is a human rights issue for both mother and child. Children have the right to the highest attainable standard of health, which entails the right to be breastfed, and women have the right to breastfeed as related to self-determined reproductive rights. Women have the right to accurate, unbiased information needed to make an informed choice about breastfeeding via the right to specific educational information to help to ensure the health and well-being of families. As breastfeeding is both a woman's and a child's right, it is, therefore, the responsibility of the healthcare system, the media, business and marketing sectors, government, and society, in general, to support and enable each woman to fulfill her breastfeeding goals and to eliminate obstacles and constraints to initiating and sustaining optimal breastfeeding practices. * The practice of medicine, at clinical, administrative, and public health policy levels, should be guided, whenever possible, by available evidence. Evidence-based medicine, the conscientious, explicit, and judicious use of current best evidence may be applied to human lactation and breastfeeding as it is to other human physiologic systems and other health behaviors. Some aspects of breastfeeding medicine lack high-quality evidence on which to base guidelines and decisions. Funding for research in human lactation and breastfeeding medicine is critical in order to address the gaps. Corporations and all other manufacturers and distributors of breast milk substitutes have a moral responsibility to adhere to the World Health Assembly International Code of Marketing of Breast-Milk Substitutes and subsequent resolutions, and physicians have the responsibility to avoid interactions and support of companies that do not adhere to this Code. * Governments are responsible for protecting the rights of women and children, including the right to breastfeed in both hospital and home settings and in the community, and are therefore dually responsible for promoting breastfeeding as a right in itself and as a means to diminish infant and child mortality, as well as combat disease and malnutrition. Alliance and collaboration with other international organizations seeking to promote, protect, and support breastfeeding may be mutually beneficial and are therefore objectives of the ABM. Research indicates that women feel strongly about breastfeeding. The act of nurturing a child at the breast is a profoundly significant part of a woman's reproductive experience and has consequences for her self-concept and sense of worth. The provision of breast milk alone, while worthwhile, is not as psychologically powerful as the process of suckling; breastfeeding affects the infant's later psychological and cognitive functioning

Research indicates that many women and families lack knowledge of the basic skills of breastfeeding, and breastfeeding is an art lost in some cultures, including the United States due to recent decades of the introduction of artificial infant formula, infant bottle-feeding, and the cultural misrepresentation that this is the norm. Research indicates that many infant foods and equipment companies market their products in ways that affect women's choices about infant feeding. The International Lactation Consultants Association (ILCA) proposes that the International Code of Marketing of Breast-milk Substitutes be considered a minimum standard for assessing industry marketing practice. Research indicates that breast-milk jaundice, although it may persist for many weeks, is a benign condition. Hence, ILCA believes that interrupting breastfeeding solely to confirm the diagnosis of breast milk jaundice, in an otherwise healthy and thriving infant, is rarely justified. ILCA takes the position that such a potentially hazardous intervention must be carefully undertaken after fully informing the mother of the value of continued lactation, the importance of continuing to express her milk, and the potential risks of introducing breast milk substitutes. In addition, evidence indicates that the use of donated banked human milk has historically been, and remains, a relatively safe and effective option for infants unable to be breastfed by their mothers. Thus, ILCA contends that women should be informed about this option and that human milk banking should be encouraged whenever possible. Evidence suggests the following: * separation of a mother from her infant imposes severe stresses on both and makes continued lactation more difficult. * whenever a breastfeeding mother and infant must be separated, appropriate actions for the continuation of breastfeeding should be provided. * gastric emptying time of breast milk is significantly less than that of other foods and the hazards of aspiration considerably reduced. * depriving sick infants of the comfort of the breast increases their stress. * under normal circumstances, breastfed infants requiring surgery should be permitted to breastfeed until two hours before surgery and as soon thereafter as they are willing. * that the use of pacifiers, bottle teats (artificial nipples), or any oral object other than the breast in the first weeks of life can lead to disturbed suckling patterns in some infants. * nipple shield use leads to decreased milk supply. * most breastfeeding problems can be solved without the use of expensive medical devices and technology. * although there is little evidence of harm from medication given to the breastfeeding mother, most have the potential to affect the infant. * the known risks of not breastfeeding should be taken into consideration when discussing the use of possible medication or exposure to one or more environmental contaminants. * Women who have undergone breast surgery may have difficulties with breastfeeding. ILCA recommends that physicians performing such surgery on a young or fertile woman should fully evaluate the need, the procedures used, the costs (physical and psychological), the long-term risks of such surgery, use the procedure least likely to create later problems, and then only after fully informing the woman of the future potential risk to her ability to breastfeed. * breast milk contains many specific and non-specific factors that may protect against HIV infection or influence the course of the disease.

Utah is working to help promote, protect, and support breastfeeding by following these recommendations and evidence-based practices. The American Academy of Pediatrics Policy Statement, Breastfeeding and the Use of Human Milk (March 2012) states: Breastfeeding and human milk are the normative standards for infant feeding and nutrition. Given the documented short- and long-term medical and neurodevelopmental advantages of breastfeeding, infant nutrition should be considered a public health issue and not only a lifestyle choice. Hospital routines to encourage and support the initiation and sustaining of exclusive breastfeeding should be based on the American Academy of Pediatrics-endorsed WHO/UNICEF Ten Steps to Successful Breastfeeding. National strategies supported by the U.S. Surgeon General's Call to Action, the Centers for Disease Control and Prevention, and The Joint Commission are involved to facilitate breastfeeding practices in U.S. hospitals and communities. Pediatricians play a critical role in their practices and communities as advocates of breastfeeding and thus should be knowledgeable about the health risks of not breastfeeding, the economic benefits to society of breastfeeding, and the techniques for managing and supporting the breastfeeding dyad. Growth patterns for monitoring for the first two years of life should be accomplished by using the World Health Organization's standard growth charts that represent standards of growth patterns of healthy term breastfed infants. Growth charts that reflect infants fed on artificial infant formula are not accurate in measuring growth. The American Academy of Pediatrics role of the pediatrician includes: # Promote breastfeeding as the norm for infant feeding # Become knowledgeable in the principles and management of lactation and breastfeeding # Develop skills necessary for assessing the adequacy of breastfeeding # Support training and education for medical students, residents, and postgraduate physicians in breastfeeding and lactation #Promote hospital policies that are compatible with the AAP and Academy of Breastfeeding Medicine Model Hospital Policy and the WHO/UNICEF "Ten Steps to Successful Breastfeeding" # Collaborate with the obstetric community to develop optimal breastfeeding support programs #Coordinate with community-based health care professionals and certified breastfeeding counselors to ensure uniform and comprehensive breastfeeding support[[br]] [[br]] The American Academy of Pediatrics Recommendations on Breastfeeding Management for Healthy Term Infants include exclusive breastfeeding (nothing other than breast milk) for about the first 6 months and to continue for at least the first year and beyond for as long as mutually desired by mother and child. Peripartum policies and practices that optimize breastfeeding initiation and maintenance should be compatible with the AAP and Academy of Breastfeeding Medicine Model Hospital Policy and include the following: direct skin-to-skin contact with mothers immediately after delivery until the first feeding is accomplished and encouraged throughout the postpartum period; delay in routine procedures (weighing, measuring, bathing, blood tests, vaccines, and eye prophylaxis) until after the first feeding is completed; ensure 8 to 12 feedings at the breast every 24 hours; ensure formal evaluation and documentation of breastfeeding by trained caregivers; give no supplements (water, glucose water, commercial infant formula, or other fluids) unless medically indicated using standard evidence-based guidelines for the management; avoid routine pacifier use in the postpartum period and until breastfeeding has been established; all breastfeeding newborn infants should be seen by a pediatrician at 3 to 5 days of age; evaluate hydration (elimination patterns) and body weight gain; assess feeding and observe feedings; and mother and infant should sleep in proximity to each other to facilitate breastfeeding.

Breastfeeding is most common among mothers who are White or non-Hispanic Asian, college-educated, and not enrolled in WIC. Mothers are more likely to continue to breastfeed beyond the newborn period if they are not employed outside the home, or if they work part-time. The most common reasons that mothers fail to breastfeed for the first year include lack of support, work or school, embarrassment, and perception of inadequate milk. Employers are encouraged to implement workplace policies to protect and support breastfeeding mothers. Mothers are encouraged to discuss this with their employers.

Health care providers must receive training on the importance of continued breastfeeding and to support mothers to continue breastfeeding their infants through the first year.

Infants who are weaned from the breast during the first year are at increased risk for gastrointestinal illness, ear infections, and other acute and chronic illnesses. 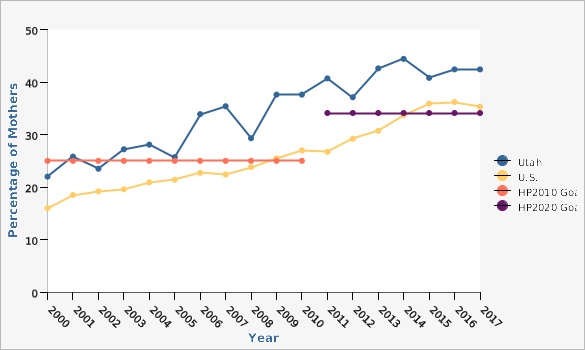 Page Content Updated On 07/08/2021, Published on 07/21/2021
The information provided above is from the Department of Health's Center for Health Data IBIS-PH web site (http://ibis.health.state.gov). The information published on this website may be reproduced without permission. Please use the following citation: " Retrieved Mon, 06 December 2021 4:20:15 from Department of Health, Center for Health Data, Indicator-Based Information System for Public Health Web site: http://ibis.health.state.gov ".