West Nile virus (WNV) is a virus that causes flu-like and neurological (of the nervous system that includes the brain, spinal cord, and nerves) illness in humans, birds, mosquitoes, and some non-human mammals.

West Nile virus (WNV) is spread to humans primarily through the bite of infected mosquitoes. Mosquitoes become infected when they feed on infected birds that have high levels of WNV in their blood. WNV affects all age groups in humans and can potentially become a serious illness. The virus was found in the U.S. in 1999 and in Utah in August 2003. WNV is commonly found in Africa, West Asia, and the Middle East. The virus has now spread throughout most of the U.S., Canada, Latin America, and the Caribbean islands. The most frequent signs of WNV illness usually begin 3-15 days after a bite from an infected mosquito. Symptoms can last a few days, several weeks, or become permanent. Most people infected with WNV do not develop symptoms; however, some people develop mild to serious symptoms. Approximately 80% of people infected with WNV do not develop symptoms of the disease. About 20% of people infected with WNV develop mild symptoms of West Nile fever. Symptoms of West Nile fever may include fever, headache, body aches, nausea, vomiting, and sometimes swollen lymph glands or a skin rash on the chest, stomach, and back. Symptoms can last for a few days to several weeks. Serious symptoms, or neuroinvasive disease, are rare and affect the nervous system. Only about 1 person per 150 people infected with WNV develops this type of illness. Neuroinvasive disease can include West Nile encephalitis (inflammation of the brain) and/or West Nile meningitis (inflammation of the membranes of the brain or spinal cord). Symptoms of neuroinvasive disease may include high fever, headache, neck stiffness, stupor (minimized reactivity to the surrounding environment), disorientation (loss of familiarity with one's surroundings), coma (an unconscious state from which one cannot be awakened), tremors (repetitive, irregular contractions of muscle groups), convulsions (violent spasms or series of jerking of the face, trunk, or extremities), muscle weakness, vision loss, numbness, and paralysis (incapable of movement). Symptoms may last several weeks, and neurological effects may be permanent. People who are over the age of 50 years and/or have a weakened immune system are at the highest risk of developing serious symptoms. There is no way to predict if someone will develop an illness after being bitten by an infected mosquito.

In the absence of an effective vaccine, prevention of West Nile virus (WNV) disease depends on community-level mosquito control and ensuring personal protection against mosquito bites. WNV prevention activities in Utah involve major contributions from many different agencies. Agencies participating in WNV prevention and surveillance include blood banks in Utah, local health departments, the Utah Department of Agriculture and Food, the Utah Division of Wildlife Resources, the Utah Mosquito Abatement Association, the Utah Public Health Laboratory, and the Utah Veterinary Diagnostic Laboratory. All local health departments in Utah are involved with investigating and responding to WNV activity in the state. Additional WNV data may be found at [https://epi.health.utah.gov/west-nile-virus/].

Surveillance data are used to monitor the geographic spread of West Nile virus (WNV) in the U.S. and Utah. Surveillance data are provided to national and regional public health officials, elected government officials, and the public. Data help to drive the development of national and local public health strategies for WNV surveillance, prevention, and control. When WNV was first detected in Utah and for several years thereafter, WNV surveillance involved tracking infections in humans, mosquito populations, wild birds, horses, and sentinel chicken populations. However, since WNV is now established in Utah, surveillance does not need to be as robust as before. Utah continues to test mosquitoes, horses, and humans, but routine wild bird and sentinel chicken testing is no longer performed. Due to the involvement of these different types of populations, many different agencies participate in data and sample collection. Mosquitoes are tested routinely for surveillance purposes. They are trapped and identified by the Mosquito Abatement Associations and tested at the Utah Public Health Laboratory (UPHL). Human infections are tested at reference laboratories and confirmed at the UPHL. Blood banks also screen for WNV positive donors. Horses are tested through private veterinarians. Mosquitoes are tested routinely for surveillance purposes, while wild birds, horses, and humans are only tested if they are reported to have become ill with symptoms compatible with a WNV infection. There are several WNV vaccines in various stages of development and testing for humans and other animals. At this time, WNV vaccine is commercially available for horses only. The best way to prevent infection in humans is to prevent mosquito bites. Use mosquito repellents that contain DEET when outdoors from dusk to dawn. For adults, use repellents containing up to 35% DEET. For children 2 months-12 years, use repellents containing up to 10% DEET. Do not put DEET on children's hands or feet. For children under the age of 2 months, do not use DEET. While DEET is considered to be very effective, scientific studies have shown that repellents containing picaridin or oil of lemon eucalyptus may provide people with protection similar to that of repellents with low concentrations of DEET. Per Communicable Disease Rule R386-702, health care providers and laboratories are required to report suspected cases of WNV to the Bureau of Epidemiology or a local health department. The Bureau of Epidemiology assists local health departments with the investigation of cases and the implementation of control measures to prevent further cases as needed. The Bureau of Epidemiology conducts ongoing statewide surveillance of WNV cases and works to improve public awareness and education.

West Nile virus (WNV) affects all age groups in humans. Some infected people with WNV are asymptomatic (without symptoms).

The most important risk factor is exposure to infected mosquitoes. The more time people spend outside, the more chance mosquitoes may bite them. It is important to reduce the risk of mosquito exposure when outdoors by using appropriate insect repellent and eliminating mosquito breeding grounds in surrounding areas. Please refer to the Utah Department of Health at [http://health.utah.gov/wnv/] or the Center for Disease Control and Prevention at [http://www.cdc.gov/ncidod/dvbid/westnile/qa/insect_repellent.htm] for appropriate insect repellent information. People over the age of 50 or people with poor immune symptoms are at the highest risk for developing severe West Nile virus disease. 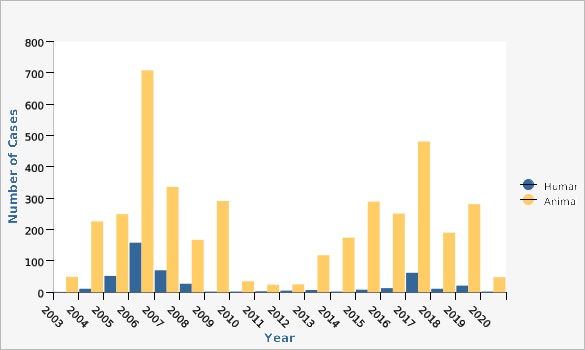 Page Content Updated On 10/06/2021, Published on 12/03/2021
The information provided above is from the Department of Health's Center for Health Data IBIS-PH web site (http://ibis.health.state.gov). The information published on this website may be reproduced without permission. Please use the following citation: " Retrieved Tue, 09 August 2022 8:32:43 from Department of Health, Center for Health Data, Indicator-Based Information System for Public Health Web site: http://ibis.health.state.gov ".