Rate of reported tularemia cases in Utah per 100,000 persons per year.

Number of reported tularemia cases in Utah per year.

Tularemia is a potentially serious illness that occurs naturally in the United States. It is caused by the bacterium ''Francisella tularensis'', which is commonly found in animals (especially rodents, rabbits, and hares). People can be infected by the bacteria in a number of ways. The most common mode of transmission is by the bite of a blood-sucking insect, such as a deer fly or tick that had previously bitten an infected animal. People can also get tularemia through direct contact with infected animals and animal products. This includes exposure to blood or tissue of infected animals or exposure through handling or eating meat (e.g. from an infected rabbit) that is not cooked well. Drinking contaminated water or breathing dust containing the bacteria may also put a person at risk of becoming ill. Person-to-person transmission of the disease does not occur. Symptoms of tularemia may include sudden fever, chills, headache, diarrhea, muscle aches, joint pain, dry cough, and progressive weakness. People can also catch pneumonia and develop chest pain and/or bloody sputum and can have trouble breathing and sometimes even stop breathing. Other signs and symptoms of tularemia depend on how a person was exposed to the bacteria. These can include ulcers on the skin or mouth, swollen and painful lymph glands, swollen and painful eyes, or a sore throat. In 1995, tularemia was dropped from the list of nationally notifiable diseases because it was so uncommon. However, because of fears that the bacteria could be used as a bioterrorism agent, tularemia was reinstated as a reportable disease in 2000. Tularemia is an urgently notifiable disease in Utah and is considered a Category A Bioterrorism Disease. This category of diseases includes high-priority agents that pose a risk to national security because they can be easily disseminated, result in high mortality rates and have the potential for major public health impact, may cause public panic and social disruption, and/or require special action for public health preparedness.

In the U.S., tularemia is now much less common than it once was in the early 20th century. The rate of disease decreased substantially in the 1950s and 1960s and has remained relatively constant since that time. In fact, in 1995 tularemia was dropped from the list of nationally notifiable diseases because it was so uncommon. However, because of fears that the bacteria could be used as a bioterrorism agent, tularemia was reinstated as a notifiable disease in 2000. In Utah, tularemia incidence rates had been historically higher than national rates. However, in recent years, Utah's incidence rates have been comparable to national rates (see graph).

Tularemia is an urgent notifiable disease in Utah. Upon notification of either a suspected or confirmed case, a local health department will investigate the case to determine the cause of the disease. Based upon that information, public health officials may implement measures to prevent additional disease.

Tularemia is more common in males of all ages, though rates among male children under 10 years and males 75 years and older tend to be especially high. Rates in children may be associated with an increased opportunity for exposure to infected ticks and animals. Also, high rates among American Indians/Alaska Natives are thought to be associated with a higher risk for exposure. 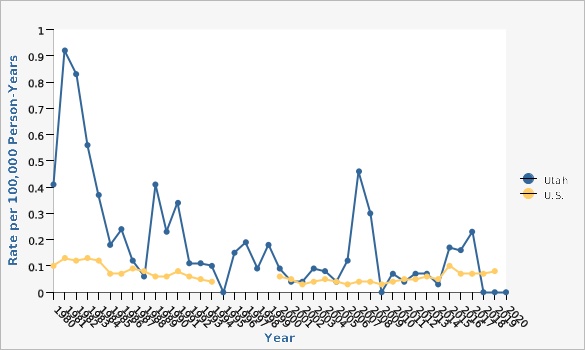 The U.S. rates are derived from the Centers for Disease Control and Prevention Morbidity and Mortality Weekly Reports. The Utah rates are derived from Utah's National Electronic Disease Surveillance System and annual surveillance reports. U.S. data only available through 2019 at the time of publication. Tularemia was removed from the national notifiable disease list for the 1995-1999 time period, so national rates are unavailable for those years. Since 2018, Utah has had a total of 11 cases reported and investigated, 2 of which were classified as "out of state" and 9 were ruled out for Tularemia and/or did not meet the CSTE case definition to be counted as a case.

Page Content Updated On 10/06/2021, Published on 12/03/2021
The information provided above is from the Department of Health's Center for Health Data IBIS-PH web site (http://ibis.health.state.gov). The information published on this website may be reproduced without permission. Please use the following citation: " Retrieved Fri, 12 August 2022 21:05:14 from Department of Health, Center for Health Data, Indicator-Based Information System for Public Health Web site: http://ibis.health.state.gov ".