Motor vehicle crashes (MVCs) are one of the leading causes of injury death and hospitalization in Utah. '''Seat belts are the single most effective safety device''' for preventing serious injuries and reducing fatalities in MVCs, according to the National Highway Traffic Safety Administration (NHTSA). In Utah for 2015-2019, there were 305 deaths to unrestrained occupants. NHTSA has found that '''deaths and serious injuries''' caused by MVCs could be '''reduced by approximately 50 percent''' with proper and consistent use of safety belts. NHTSA also found that if all 50 states achieved 90 percent seat belt usage, it would result in an overall total cost savings of $5.5 billion.^1^ [[br]] ---- #NHTSA, [http://www-nrd.nhtsa.dot.gov/pubs/811140.pdf Traffic Safety Facts]

The Violence and Injury Prevention Program (VIPP) provides funding to the 13 local health departments in Utah to implement motor vehicle safety programs and Safe Kids coalitions/chapters activities. These programs focus on child passenger safety and teen driving. The VIPP partners with the Utah Teen Driving Safety Task Force, Zero Fatalities Program, and Utah Highway Safety Office, among other state and local agencies to prevent motor vehicle crash deaths. For the past eight years, a book has been published that tells the stories of teens who died in motor vehicle-related crashes. The book is distributed to each drivers education instructor in the state as a prevention tool. The books can be downloaded at [http://www.health.utah.gov/vipp/teens/teen-driving] or [http://zerofatalitiesut.com/dont-drive-stupid/]. The Utah Department of Transportation Zero Fatalities Program ([http://ut.zerofatalities.com/]) is an educational campaign aimed at reducing some of the top causes of traffic related deaths in Utah: not buckling up, drowsy driving, impaired driving, distracted driving, and aggressive driving. Utah's seat belt law is a '''primary enforcement law'''. Primary seat belt laws allow law enforcement officers to ticket a driver for not wearing a seat belt without any other traffic offense taking place. All vehicle occupants must wear seat belts and children ages 8 and younger must be properly restrained in a car seat or booster seat.

The Violence and Injury Prevention Program (VIPP) mission is to be "a trusted and comprehensive resource for data and technical assistance related to violence and injury. With this information, we help promote partnerships and programs to prevent injuries and improve public health."

According to 2019 observational surveys of seat belt use, Utah males (87.4%) are less likely than females (93.7%) to wear a seat belt. Seat belt usage rates are higher in urban counties than rural counties. Pickup truck occupants had the lowest overall seat belt usage.

Lack of automobile seat belt use is related to hospital emergency room visits and hospital admissions due to motor vehicle crash injuries.

Failure to use seat belts increases the risk of motor vehicle crash injury and death. 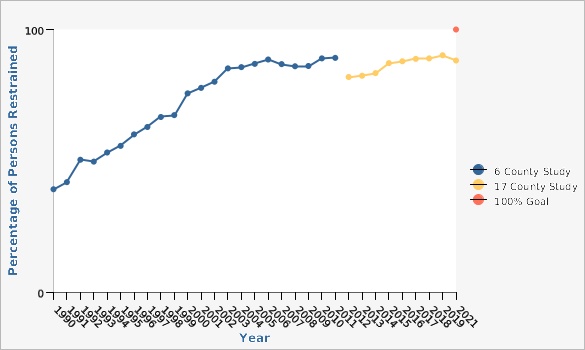 Beginning in 2012, the Utah Highway Safety Office began to observe front seat passengers of 17 counties whereas in earlier years observations were conducted in only the six most populous counties. 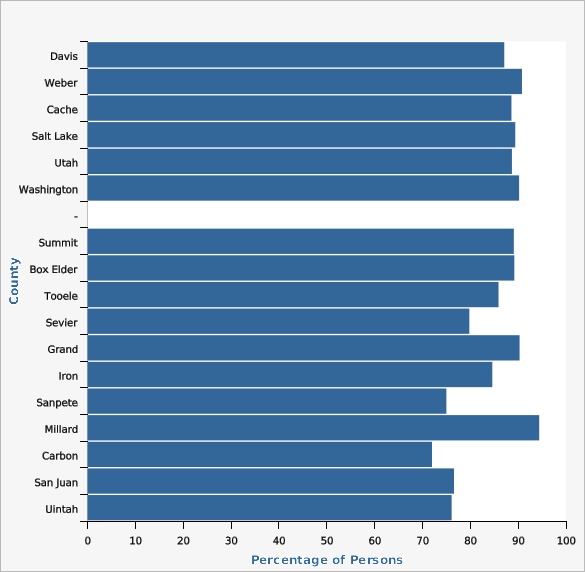 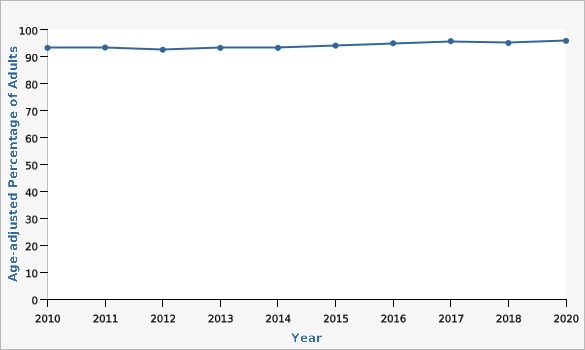 As part of the Behavioral Risk Factor Surveillance Survey, Utah adults were asked about their seat belt use when driving or riding in a car. In 2020, '''95.8%''' of Utah participants reported that they '''always or nearly always use seat belts'''.

Adolescent Seat Belt Use: Percentage of Students Who Never or Rarely Wore a Seat Belt, Utah and U.S., 1991-2019 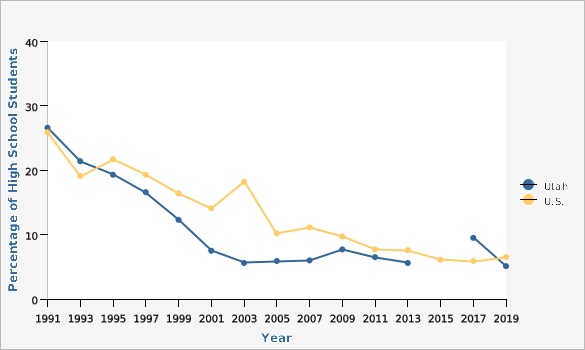 *Use caution in interpreting; the estimate has a coefficient of variation >30% and is therefore deemed unreliable by Utah Department of Health standards. 2015 YRBS data for Utah are not available. The Youth Risk Behavioral Surveillance System includes national, state, and local school-based surveys of representative samples of 9th through 12th grade students. These surveys are conducted every two years, usually during the spring semester. The national survey, conducted by the U.S. Center for Disease Control, provides data representative of high school students in public and private schools in the United States. The state and local surveys, conducted by departments of health and education, provide data representative of public high school students in each state or local school district.

Page Content Updated On 10/21/2021, Published on 11/23/2021
The information provided above is from the Department of Health's Center for Health Data IBIS-PH web site (http://ibis.health.state.gov). The information published on this website may be reproduced without permission. Please use the following citation: " Retrieved Mon, 06 December 2021 4:05:05 from Department of Health, Center for Health Data, Indicator-Based Information System for Public Health Web site: http://ibis.health.state.gov ".