Number of pertussis cases reported in Utah (including cases identified in outbreak settings).

According to the Council for State and Territorial Epidemiologists, "''Bordetella pertussis'' is the most poorly controlled bacterial vaccine-preventable disease in the U.S." Controlling pertussis is a difficult challenge addressed by increasing vaccination rates, prompt identification of cases, decreasing contact between infected and non-infected individuals, and treatment of ill individuals. Pertussis is a contagious respiratory disease caused by the bacteria ''Bordetella pertussis''. Although pertussis may be a mild disease in older children and adults, these infected people may transmit the disease to other susceptible persons, including unimmunized or incompletely immunized infants. Newborns are at highest risk for pertussis-associated complications, such as pneumonia and inflammation of the brain, but cannot be immunized until they are 2 months old, so they rely on the antibodies their mother passes to them in the womb. For this reason, pertussis vaccination (in the form of the Tdap vaccine) is recommended for pregnant women during each pregnancy, preferably between gestation weeks 27 through 36. Although not common, pertussis can cause death, especially in children under one year of age. Most children are protected against pertussis by vaccination during childhood, but immunity decreases over time and can leave adolescents and adults unprotected. National figures reported by the CDC indicate that infants aged less than one year, who are at greatest risk for severe disease and death, continue to have the highest reported rate of pertussis. Tdap is a pertussis vaccine, sometimes referred to as a booster, for adolescents and adults. There is evidence indicating that the highest level of protection from the Tdap booster lasts around two years and decreases over time. This reduction in immunity over time has also been observed in individuals that have become infected with pertussis. This decreasing immunity is called waning immunity.

Reduce, eliminate, or maintain elimination of cases of vaccine-preventable diseases
U.S. Target: Not applicable, see sub-objectives in this category

Pertussis activity reached a nearly 20-year low in 2020, with 4.2 cases per 100,000 population (compared to a national rate of 1.6 cases per 100,000). As recently as 2012, when there was a national outbreak that impacted Utah, pertussis activity was at pre-vaccine era levels with a rate of 55.8 cases per 100,000 in Utah (a case rate of over 13x the 2020 Utah rate). There are many factors that likely contributed to the dramatic drop in case rate in 2020, including but not limited to masking and/or remote learning in school settings due to the COVID-19 pandemic, good DTaP vaccine coverage in those under 24 months, social distancing in the general population, reduced air travel, and increased utilization of outdoor settings for formal and informal gatherings. The potential for severe disease is greatest in those under 1 year of age. There were 8 reported cases in this age group in 2020, compared to 18 in 2019, 29 in 2018, 40 in 2017, and 21 in 2016. The 8 cases reported in 2020 made up 5.8% of total reported cases. This age group is likely benefiting from relatively high DTaP vaccination coverage. 95.2% of those born in 2017 had 3 or more DTaP doses at 24 months of age, compared to a national benchmark of 92.9%. While 2020 was a relatively low activity year for pertussis in Utah, that trend is not likely to continue with the relaxation of many early-pandemic safety measures. In addition, pertussis can be both rapid in its reemergence and cyclical in nature. Both of those qualities will present future challenges to pertussis suppression in Utah.

Throughout the 1990s and up through 2004 (with the exception of 1998, when a statewide outbreak of pertussis occurred in Utah), the rate of pertussis in Utah mirrored national trends. Utah pertussis rates began to climb in 2005, and in 2006 Utah had a rate of pertussis nearly six times the national average. However, a substantial decrease in the rate of pertussis occurred in Utah during 2007 and continued to decline to near the U.S. average in 2008. Pertussis began to increase again in 2009 with rates remaining above the national average. In 2012, data showed national rates to be double what they were in 2011, which was the same trend seen in Utah. However, Utah rates have been higher than national rates since 2011, even with the nearly 20 year record-low case rate of 4.2 cases per 100,000 population in 2020. Of note, these comparisons are not age-adjusted. It is likely that Utah's rate compared to the national rate would drop significantly if it were age-adjusted due to the disproportionately young population in Utah. Pertussis rates tend to be highest in younger age groups, which is likely skewing Utah's rates higher than the national average.

Surveillance data are used to identify persons or areas in which additional efforts are required to reduce disease incidence. Surveillance data help to promptly identify outbreaks in which prophylaxis (treatment to prevent or mitigate disease) of contacts can help limit the spread of disease. Surveillance data are also used in evaluating vaccination policies at the state level. Childhood immunization is the most effective weapon against pertussis infection. The UDOH Immunization Program works with parents, physicians, and local health departments to provide immunization histories for all children under age two years and remind parents when vaccinations are due. The adult pertussis vaccine (Tdap) is recommended for adolescents aged 7-18 years. Also, routine use of a single dose of Tdap for adults over 19 years of age is recommended to replace the next booster dose of tetanus and diphtheria toxoids vaccine (Td). Tdap is also recommended for adults who have close contact with infants less than one year of age. The Bureau of Epidemiology conducts ongoing statewide surveillance of pertussis cases. Per Communicable Disease Rule R386-702-3, health care providers and laboratories are required to report suspected cases of pertussis to the Bureau of Epidemiology or the local health department within three business days of identification. The Bureau of Epidemiology assists local health departments with the investigation of cases and implementation of control measures to prevent further cases.

Public health clinics and private provider offices offer vaccines to adults, adolescents, and children in their communities. For general information about immunizations please call the UDOH Immunization Program at 1-800-275-0659 or visit us at our website: [https://immunize.utah.gov/].

Although pertussis affects all populations, the majority of cases in Utah and the U.S. are seen in children less than 14 years of age. Adolescents and adults generally have milder symptoms often without the characteristic "whoop" that alerts clinicians to the possibility of pertussis. Because of this, pertussis is most likely highly under-detected and under-reported in older age groups. Infants and young children are more likely to be accurately diagnosed with pertussis because they tend to have more severe symptoms and often suffer complications. A major source of pertussis infection in infants and young children is an older sibling or adult caregiver (mom, dad, grandparent, etc.).

Young infants are at the highest risk for clinical disease and complications (pneumonia and encephalitis). 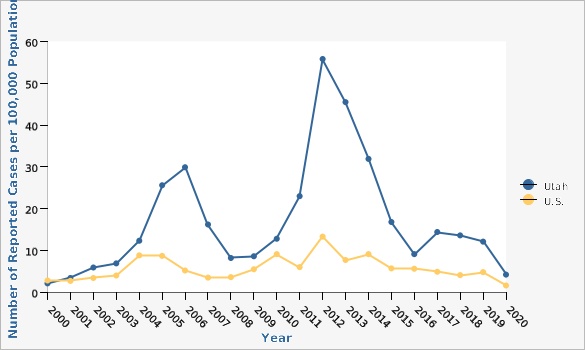 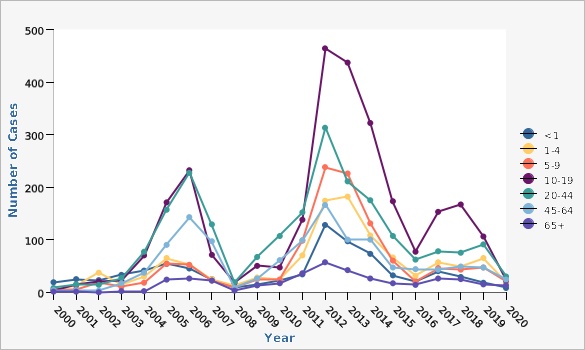 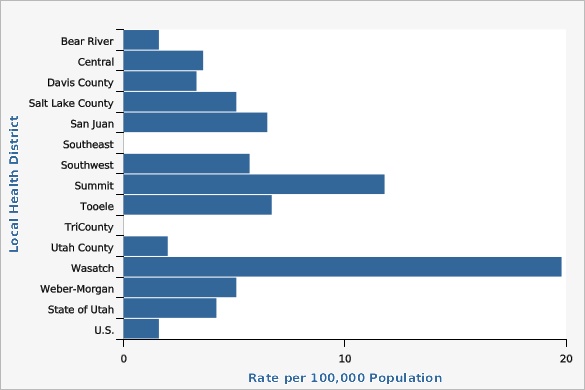 Page Content Updated On 10/14/2021, Published on 01/14/2022
The information provided above is from the Department of Health's Center for Health Data IBIS-PH web site (http://ibis.health.state.gov). The information published on this website may be reproduced without permission. Please use the following citation: " Retrieved Tue, 28 June 2022 12:25:42 from Department of Health, Center for Health Data, Indicator-Based Information System for Public Health Web site: http://ibis.health.state.gov ".