It is extremely important for hearing loss to be detected early to optimize communication development. The most effective method to implement early identification of hearing loss is to screen all babies before they leave the birthing hospital or by two weeks of age to diagnose permanent hearing loss quickly, and begin intervention as soon as possible.

Increase the proportion of newborns who are screened for hearing loss by no later than age 1 month, have audiologic evaluation by age 3 months, and are enrolled in appropriate intervention services no later than age 6 months
U.S. Target: Not applicable, see subobjectives in this category

The Utah Early Hearing Detection and Intervention (EHDI) Program within the Utah Department of Health oversees newborn hearing screening in Utah and documents hearing screening on over 99% of newborns. In 2017, 98.2% of infants with documented screening results were screened by one month of age (as reported to the CDC EHDI Hearing Screening and Follow-up Survey [HSFS]), an increase from 97.4% reported for 2011 births. Many of the infants with screening delayed past one month are NICU (newborn intensive care unit) babies where screening may not be indicated until discharge (often after one month of age), or home births who may not have access to screening before one month. Babies receiving a diagnostic exam prior to three months has steadily increased from 56.7% in 2011 to 79.4% in 2017. Babies in the diagnostic process may receive confirmation of hearing loss after the optimal 3 month "window" although they received one or more diagnostic evaluations before that time. Values reported to the CDC are based on the final or "confirmed" hearing status which can consist of multiple previous diagnostic exams.

State legislation requires that ALL newborns, including those born at home, must have their hearing screened by one month of age and results reported to the Utah Department of Health. Increased efforts have been focused on providing screening equipment, support, and training for local midwives who collectively birth over 1,000 babies per year. The Utah Newborn Hearing Screening/EHDI Program supports tracking efforts and provides resource information to hospitals, midwives, medical providers, local programs, and families. Improvements in the EHDI tracking surveillance system and decreasing loss to follow-up/documentation has been a priority, as well as matching EHDI data across other state programs (Utah Birth Defects Network, CCHD, Vital Records, etc.). Implementation of the Birth Certificate Alert Program, in collaboration with local health departments, began statewide in 2014. Twenty-six of 29 local health departments are now participating. Alerts to parents applying for their child's birth certificate are generated if their infant has not yet completed the newborn hearing screening process. The Newborn Hearing Screening Committee endorses Healthy People 2020 goals and assesses progress quarterly. The Utah EHDI Program has been working extensively with the Office of Vital Records both to clean and match data, as well as by updating the Birth Certificate Application so that midwives can now enter (November 2019) newborn hearing screening results as they apply for the child's birth certificate. Beginning in 2017 the Utah EHDI Program partnered with Utah Family Voices/Utah Parent Center to employ a Parent Consultant to provide support to families who have a child who is deaf or hard of hearing. This has been a valuable partnership and contact has been made with all families who had a child diagnosed with a hearing loss in 2018.

Resources for families and providers on deafness and hearing loss, state requirements, intervention services, and related handouts are available at [https://health.utah.gov/cshcn/programs/ehdi.html]. Statewide hearing screening and audiology diagnostic providers can be found at [https://health.utah.gov/cshcn/programs/map.html]. Families of infants identified with permanent hearing loss are offered targeted services for deaf and hard of hearing children birth through 3 years of age through the UDOH Baby Watch Early Intervention Program ([https://health.utah.gov/cshcn/programs/babywatch.html BWEI]) and the Utah School for the Deaf Parent Infant Program ([https://www.usdb.org/programs/deaf-and-hard-of-hearing/ USDB]). Families in need of parent-to-parent support upon initial diagnosis or at any point throughout the EHDI process may contact EHDIparents@utah.gov. For up-to-date resources and community happenings, interested parties can follow the Utah EHDI Family Support and Information Facebook page (@UtahEHDI). Topics of interest to deaf and hard of hearing families are presented live monthly through the Utah EHDI WebinEARS series and are recorded and available on the Facebook page. The Utah Parent Center helps all families no matter their child's diagnosis. For more information, visit [https://utahparentcenter.org]. The Utah Children's Hearing Aid Program (CHAP) provides access to hearing aids to children under 6 years of age for financially eligible families. For more information and/or to apply, visit [https://health.utah.gov/cshcn/programs/chap.html].

All hospitals and birth attendants are required to participate in newborn hearing screening by legislative mandate. Hospital programs have screening equipment on site and do a very good job of screening babies prior to discharge. For babies who require follow-up, completion rates are dependent upon individual hospital commitment, location, and patient demographics. Actual screening rates for home births reflect local availability, cost, and convenience for families. Home birth hearing projects have increased out-of-hospital screening rates from 23% in 2007 to more than 90% in 2016.

All hospitals are required to participate in newborn hearing screening by legislative mandate. However, actual screening rates and timelines are dependent upon individual hospital commitment, regardless of demographics.

The critical age for initiating habilitation for hearing loss is prior to six months of age. Most infants receiving intervention by this age develop language and social skills approximating their normal hearing peers by kindergarten enrollment. Intervention delayed beyond six months has been shown to have less successful outcomes. 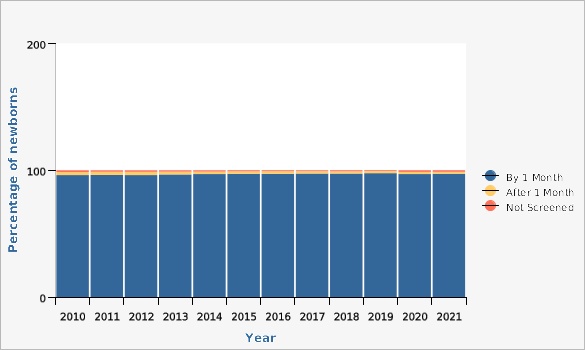 Screening for hearing loss is completed by hospital staff prior to discharge or for infants born outside a hospital setting by the attending midwife or other community provider. Screening is accomplished through automated auditory brainstem response (A-ABR) or otoacoustic emissions (OAE) in accordance with the Joint Committee on Infant Hearing (JCIH, 2007).

New hearing screening objectives adopted in 2010 therefore trend data begins in 2010. Infants should be screened by 1 month of age. Infants not screened include infants who are deceased, refused screening, or lost to follow-up. 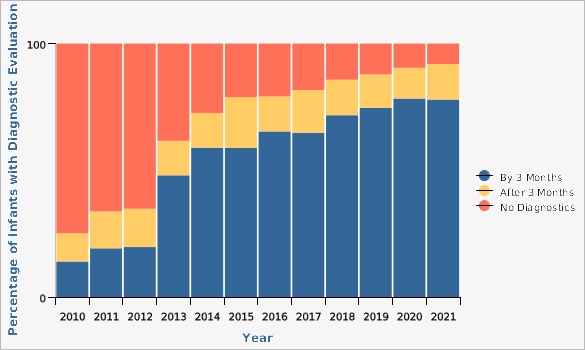 When an infant does not pass newborn hearing screening the infant is referred to an audiologist with expertise in infant testing to perform a diagnostic audiologic evaluation. The diagnostic testing should be performed no later than 3 months of age.

New hearing screening objectives adopted in 2010 therefore trend data begins in 2010. Approximately 1% of all Utah births require diagnostic follow-up for not passing the newborn hearing screening 2-stage process. Not showing on this graph is that the Utah lost to follow-up rate has also decreased from 67.0% in 2010 to 3.0% in 2017.[[br]] [[br]] Reasons for not having a diagnostic exam are broken out in [[a href="indicator/view/NewHearScr.EvalReas.html" ENT-VSL-1.2 (Part 2): Reasons for No Diagnosis]]. 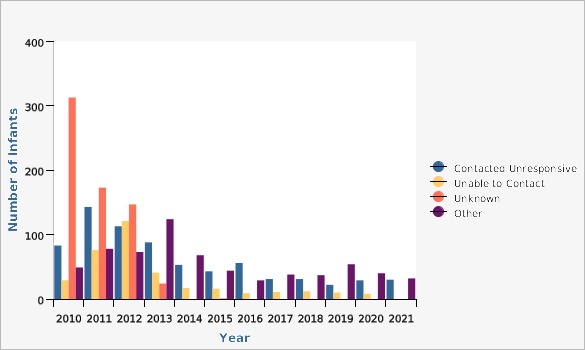 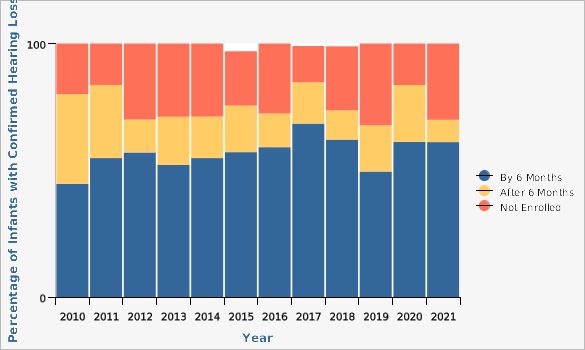 Infants with confirmed hearing loss should be enrolled in Early Intervention by 6 months of age to begin communication development as soon as possible. 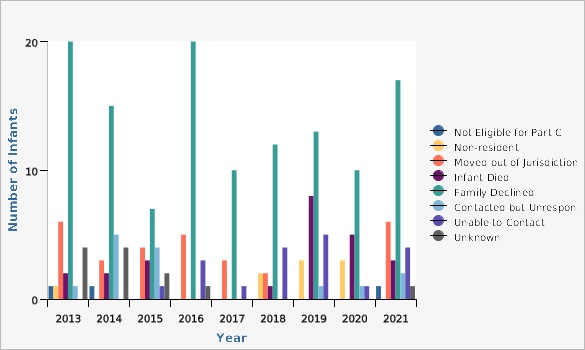 Documented reasons for not being enrolled in EI services include: not eligible for Part C, non-resident, moved out of jurisdiction, infant died, family declined, contacted but unresponsive, unable to contact, and unknown. Utah EHDI has been actively working with the Utah Schools for the Deaf and Blind Parent Infant Program, as well as Baby Watch Early Intervention to determine reasons families decline Early Intervention services. This will guide future quality improvement initiatives.

Reasons for no Early Intervention enrollment were not collected on CDC HSFS prior to 2013. 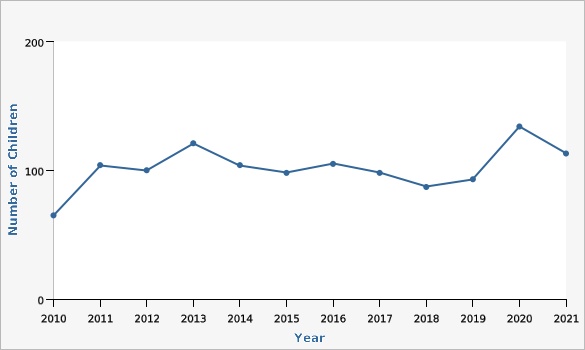 For an extensive list of Newborn Hearing Screening related links, please see the Utah Medical Home Portal website at [http://www.medicalhomeportal.org/newborn/hearing-loss-and-deafness]. National and local links are also available at [http://www.cdc.gov/ncbddd/hearingloss/index.html] and [http://infanthearing.org]. Local newborn hearing screening and Audiology resources can be found at [https://health.utah.gov/cshcn/programs/map.html] or by calling the Utah EHDI Program at 801-584-8215.

Page Content Updated On 10/22/2019, Published on 11/06/2019
The information provided above is from the Department of Health's Center for Health Data IBIS-PH web site (http://ibis.health.state.gov). The information published on this website may be reproduced without permission. Please use the following citation: " Retrieved Wed, 05 August 2020 5:01:48 from Department of Health, Center for Health Data, Indicator-Based Information System for Public Health Web site: http://ibis.health.state.gov ".