The number of reported confirmed cases of measles infections in Utah per 100,000 population per year.

The number of confirmed measles cases reported in Utah.

Measles is a highly contagious viral disease that can be particularly serious in infants and adults. Although measles usually lasts only one to two weeks, it can cause serious complications such as pneumonia, ear infections, and encephalitis (inflammation of the brain). In very young or malnourished patients, blindness can occur. Measles is a common and often fatal disease in developing countries. The World Health Organization (WHO) reports that even though a safe and cost-effective vaccine is available, in 2017, there were 110,000 measles deaths globally, mostly among children under the age of five. Before the measles vaccine was introduced in 1963, more than a half-million cases of measles were reported annually in the United States. Due to intensive efforts to vaccinate preschool-aged children, reported cases of measles have declined rapidly over time. The United States has established the goal of eliminating the transmission of endemic measles strains.

In 1996, the Utah childhood immunization rate was the lowest in the country. Since that time, the immunization rate in Utah has improved. The recent low rates of measles infection in Utah can be attributed both to improved immunization rates, as well as the natural cycle of the disease. However, despite higher immunization rates in Utah than in previous years, there is still more work to be done in this regard. For example, in 2011, Utah experienced an outbreak of measles with 13 cases reported. Measles was introduced into Utah through foreign travel by an unvaccinated adolescent. Two of the 13 cases were known to be vaccinated, and the remaining 11 were either unvaccinated, partially vaccinated, or documentation was not found. Two more measles outbreaks were subsequently identified in 2014 (3 cases) and 2017 (3 cases) in Utah; the majority of cases in these outbreaks were unvaccinated. No measles cases were reported in Utah from 2018 to 2020. In 2020, the Utah MMR vaccination rate among children aged 24 months was 91.7%, compared to 90.5% for the U.S. In the U.S., 17 measles outbreaks were reported in 2018 resulting in 372 cases. Three outbreaks in New York State, New York City, and New Jersey, respectively, contributed to most of the cases. Cases in those states occurred primarily among unvaccinated people in Orthodox Jewish communities. These outbreaks were associated with travelers who brought measles back from Israel, where a large outbreak was occurring. There were 1,282 measles cases in 2019, the greatest number of cases reported in the U.S. since 1992. In 2020, 13 cases of measles were confirmed in 8 states in the U.S.

Travelers to foreign endemic countries frequently import the highly contagious measles virus into the U.S. Each imported measles case could start an outbreak, especially if under-vaccinated groups are exposed. Surveillance and prompt investigation of cases and contacts are critical to halt the spread of disease. Surveillance data are used to characterize persons, groups, or areas in which additional efforts are required to reduce disease incidence. Childhood immunization is the most effective weapon against measles infection. UDOH Immunization Program staff work with parents, physicians, and local health departments to provide immunization histories for all children under age two and remind parents when vaccinations are due. Since 1996, the Utah immunization rate has improved. Staff from the UDOH Bureau of Epidemiology conduct ongoing statewide surveillance of measles cases. Per Communicable Disease Rule R386-702-3, health care providers and laboratories are required to report suspected cases of measles immediately by telephone to the Bureau of Epidemiology or the local health department. When measles is reported the Bureau of Epidemiology assists local health departments with the investigation of cases and implementation of control measures to prevent further cases. Control measures were implemented by public health during the 2014 and 2017 measles outbreaks, limiting the spread of the disease. The control methods used for these responses resulted in the post-exposure treatment of over 200 persons, over 800 MMR containing vaccines administered by the local health departments, and the voluntary quarantine of 443 susceptible community members. Public health officials continue to conduct ongoing surveillance for measles cases in Utah.

Public health clinics and private provider offices offer vaccines to adults, adolescents, and children in their communities. For general information about immunizations please call the State Immunization Program at 1-800-275-0659 or visit us at our web site: [https://www.immunize.utah.gov]

Complications from measles occur most frequently in children under 5 years of age and adults over 20 years of age. In very young or malnourished patients, blindness can occur. 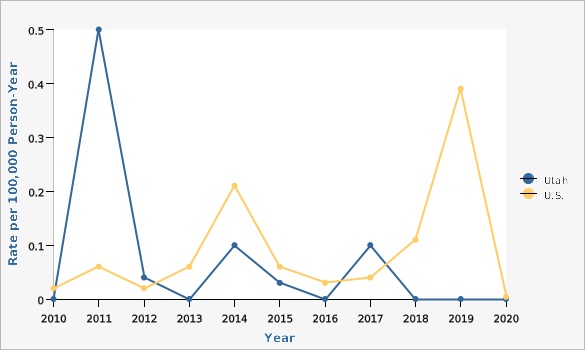 Page Content Updated On 10/06/2021, Published on 10/21/2021
The information provided above is from the Department of Health's Center for Health Data IBIS-PH web site (http://ibis.health.state.gov). The information published on this website may be reproduced without permission. Please use the following citation: " Retrieved Fri, 12 August 2022 7:01:49 from Department of Health, Center for Health Data, Indicator-Based Information System for Public Health Web site: http://ibis.health.state.gov ".