Number of marriages/divorces per 1,000 persons.

Number of persons in population.

Marriage/divorce status is an important determinant of the social structure of a population. Studies have confirmed that marital status is among many health risk factors.

Over the past 30 years, marriage rates in Utah have been much higher than U.S. rates, but the gap has narrowed consistently since 2006 and the rate difference between Utah and the U.S. has fluctuated in the same range since then. 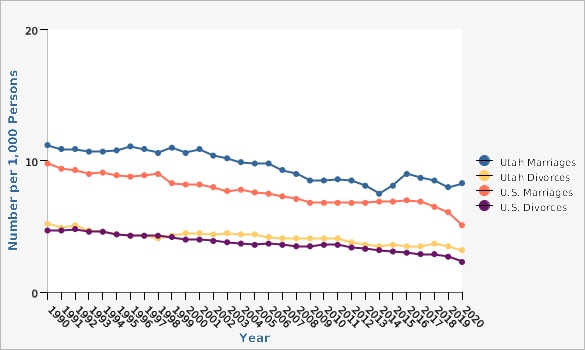 Page Content Updated On 11/02/2022, Published on 12/20/2022
The information provided above is from the Department of Health's Center for Health Data IBIS-PH web site (http://ibis.health.state.gov). The information published on this website may be reproduced without permission. Please use the following citation: " Retrieved Tue, 07 February 2023 11:38:53 from Department of Health, Center for Health Data, Indicator-Based Information System for Public Health Web site: http://ibis.health.state.gov ".