Hepatitis A is a liver disease that results from infection with the hepatitis A virus. A hepatitis A case is defined as a person meeting specific laboratory criteria who has a clinical presentation of the disease.

Number of confirmed hepatitis A infections reported in Utah each year.

The rate reported is number of cases per 100,000 population per year.

Hepatitis A is a contagious liver disease that results from infection with the hepatitis A virus. It can range in severity from a mild illness lasting a few weeks to a severe illness lasting several months. Hepatitis A is usually spread when a person ingests fecal matter--even in microscopic amounts--from contact with objects, food, or drinks contaminated by the feces or stool of an infected person. The best way to prevent hepatitis A is by getting vaccinated. The hepatitis A vaccine was introduced in 1995 and health professionals now routinely vaccinate all children, travelers to certain endemic countries, and persons at risk for the disease. Hepatitis A vaccination has dramatically affected rates of the disease in the United States and the number of reported cases in Utah has steadily decreased since its advent. In recent years, hepatitis A outbreaks have occurred from several different sources including foodborne transmission through ingestion of contaminated food and person-to-person transmission through close contact with an infected person, most recently, among people who use drugs, people experiencing homelessness, and men who have sex with men. Recent outbreaks have mainly affected adults. Increased vaccination efforts targeting adults in at-risk populations can help limit the size, duration, and spread of person-to-person outbreaks. Surveillance data are used to detect outbreaks, determine the effectiveness of hepatitis A vaccination, monitor disease incidence in all age groups, determine the epidemiologic characteristics of infected persons including the source of infection, and assess and reduce missed opportunities for vaccination. While the average number of annual hepatitis A virus (HAV) infections reported to CDC in recent years has declined substantially compared to 2000, fluctuations have occurred in the last 20 years because large outbreaks occurred.

After a long downward trend in the U.S., the first increase between 2012 and 2013 (1,562 and 1,781 reported cases, respectively), was due to a large multi-state outbreak associated with pomegranate arils imported from Turkey. Between 2015 and 2016, the reported cases again increased by 44.4% from 1,390 in 2015 to 2,007 cases in 2016. The 2016 increase was due to two hepatitis A outbreaks, each of which was linked to imported foods. The actual number of cases is considered to be much higher since many people who are infected never have symptoms and are never reported to public health officials. In 2017 and 2018, the Utah Department of Health (UDOH) responded to an outbreak of hepatitis A among people experiencing homelessness and persons who use drugs. UDOH worked closely with affected local health departments and community partners to increase vaccination in communities most at risk, including offering vaccination in jails, emergency departments, syringe service programs, substance use treatment facilities, and homeless shelters. According to national data provided by the CDC, hepatitis A incidence in the U.S. has declined from 12.0 cases per 100,000 population in 1995 to 0.6 cases per 100,000 population in 2016. Declines were greatest among children and in those states where routine vaccination of children was recommended beginning in 1999. Hepatitis A incidence has increased significantly since 2017, a result of ongoing widespread person-to person outbreaks of hepatitis A in 36 states.

Public health clinics and private provider offices offer vaccines for adults, adolescents, and children in their communities. For general information about immunizations please call the Utah Department of Health Immunization Program at 1-800-275-0659, or visit [https://immunize.utah.gov/].

Most cases of hepatitis A are due to person-to-person transmission. The decline in hepatitis A cases is most likely due to better hygiene (especially hand washing and food preparation) and broader use of the new hepatitis A vaccine, but it may also be due to the natural cycle of the disease. 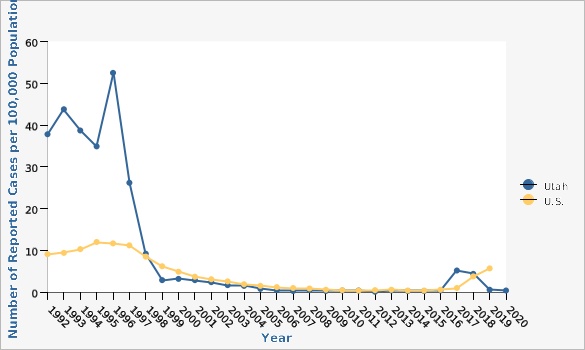 Page Content Updated On 10/06/2021, Published on 02/18/2022
The information provided above is from the Department of Health's Center for Health Data IBIS-PH web site (http://ibis.health.state.gov). The information published on this website may be reproduced without permission. Please use the following citation: " Retrieved Sat, 03 December 2022 14:41:15 from Department of Health, Center for Health Data, Indicator-Based Information System for Public Health Web site: http://ibis.health.state.gov ".