Number of reported culture-confirmed and probable cases of ''Salmonella'' infections per 100,000 population per year.

Number of reported culture-confirmed and probable cases of salmonellosis per year.

Salmonellosis is an infectious disease caused by ''Salmonella'' bacteria. Most persons infected with ''Salmonella'' develop diarrhea, fever, and abdominal cramps 12-72 hours after exposure. The illness usually lasts 4-7 days, and most persons recover without treatment. In some patients, the ''Salmonella'' infection may spread from the intestines to the blood stream and can lead to hospitalization or death unless the person is treated promptly. The elderly, infants, and those with impaired immune systems are more likely to have a severe illness. The infection is acquired by eating or drinking food contaminated with ''Salmonella'' bacteria. Illness may also be spread by direct contact with an infected person or animal. ''Salmonella'' bacteria are commonly found in food products such as eggs, egg products, meats, poultry, unpasteurized dairy products, and contaminated produce. Domestic animals including poultry (especially baby ducks and chicks), reptiles (e.g., lizards and snakes), amphibians (especially turtles), and farm animals (e.g., cattle and pigs) may carry the bacteria.

From 1994 to 2000, ''Salmonella'' Enteritidis (SE) was found in approximately 55% of all ''Salmonella'' infections. This was primarily due to several outbreaks associated with eating raw or undercooked eggs. However, since 2000, there has only been one outbreak of salmonellosis associated with eggs in Utah. This has resulted in a decrease in the number of ''Salmonella'' infections overall and a decrease in the proportion of ''Salmonella'' infections that are due to SE. In 2017, 15.1% of all ''Salmonella'' infections were the serotype SE. The improvement in decreasing ''Salmonella'' rates may be directly linked to the Utah Egg Quality Assurance Program (UEQAP) described in the "How Are We Doing?" section. Additionally, improvements in laboratory and epidemiologic techniques, as well as improved communication between state and local jurisdictions, has resulted in improved outbreak detection, especially for outbreaks due to uncommon sources of ''Salmonella''. Per the Communicable Disease Rule R386-702-3, health care providers and laboratories are required to report salmonellosis cases to the Bureau of Epidemiology or a local health department. The Bureau of Epidemiology assists local health departments with the investigation of cases and outbreaks and implementation of control measures to prevent further cases. Local health departments make an attempt to interview every case of salmonellosis reported to public health. Information gathered during these interviews includes food history, water exposure, animal exposure, travel history, and contact with ill individuals. Data from these interviews are analyzed and used to identify outbreaks and common sources of infection. Some general guidelines to prevent the spread of ''Salmonella'' include the following: *Always refrigerate meat, cook meats completely, and never eat raw meat. *Always refrigerate eggs and cook eggs and food containing raw eggs completely. Never eat dough, batter, sauces, ice cream, or other foods that contain raw eggs. *Use only pasteurized milk and juices. *Carefully wash hands before and after preparing food, after using the toilet, changing diapers, or touching animals. [[br]] Visit [http://www.cdc.gov/handwashing/] for good hand washing techniques.

All age groups can be infected with ''Salmonella'', but young children, the elderly, and those with compromised immune systems are the most severely affected. 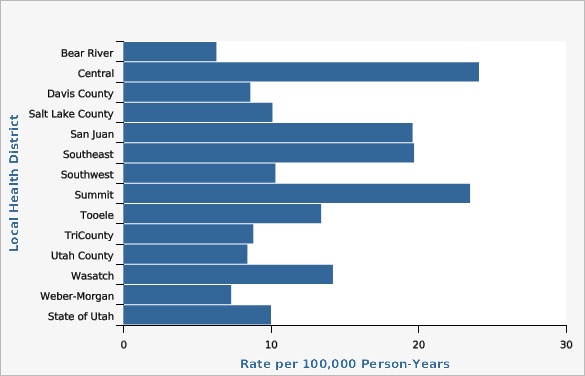 The CSTE case definition counts both confirmed and probable cases of ''Salmonella''. 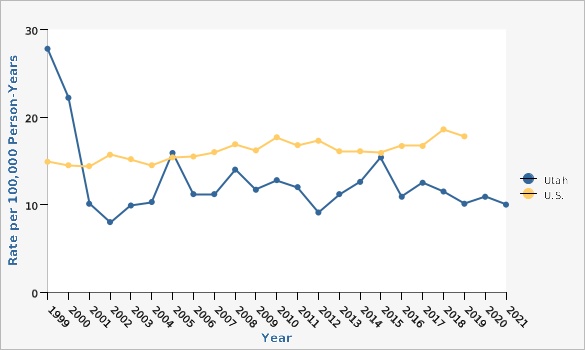 The U.S. rates are derived from the Centers for Disease Control and Prevention Morbidity and Mortality Weekly Report Summary of Notifiable Diseases. The Utah rates are derived from Utah annual surveillance reports. Utah and U.S data are preliminary and may change. The CSTE case definition includes all confirmed and probable cases of ''Salmonella''.

Page Content Updated On 10/02/2018, Published on 10/23/2018
The information provided above is from the Department of Health's Center for Health Data IBIS-PH web site (http://ibis.health.state.gov). The information published on this website may be reproduced without permission. Please use the following citation: " Retrieved Thu, 23 January 2020 22:40:19 from Department of Health, Center for Health Data, Indicator-Based Information System for Public Health Web site: http://ibis.health.state.gov ".