Campylobacteriosis is an infectious disease that is a leading cause of acute diarrheal illness worldwide. Symptoms can range from no symptoms to severe bloody diarrhea with symptoms similar to acute appendicitis. However, the most common symptoms are diarrhea, abdominal pain, malaise, fever, nausea, and vomiting. It is caused by a motile, gram negative bacteria of the genus ''Campylobacter''.

Number of culture-confirmed cases of campylobacteriosis and probable cases reported in Utah each year.

The rate reported is the number of cases in Utah per 100,000 population per year.

''Campylobacter'' is one of the most common bacterial causes of diarrheal illness in the United States. Most cases occur as isolated, sporadic events, and not as a part of a large outbreak. The majority of those infected will experience symptoms within 2-5 days after exposure to the bacteria, including diarrhea, severe abdominal cramping, and fever; this may be accompanied by nausea and vomiting. The illness typically lasts one week, but may be prolonged in some individuals and relapse can occur. Long-term complications are rare, but include reactive arthritis and Guillain-Barre Syndrome. All age groups can be infected by ''Campylobacter'' bacteria. The infection is acquired by eating or drinking food contaminated with ''Campylobacter'' bacteria. Illness may also be spread by direct contact with an infected person or animal. Improperly cooked poultry, untreated water, and unpasteurized (raw) milk are the main sources of infection.

Campylobacteriosis became a reportable disease in Utah in 1983. Increases in number of cases per 100,000 population reported annually since 1983 may be due to better reporting and improved laboratory detection methods. Though the incidence in campylobacteriosis dropped in 2020, it is still well above the U.S. target for 2020, which is 8.5 per 100,000 population per year.

Active surveillance through FoodNet indicates that 14.3 cases were diagnosed in 2020 for each 100,000 persons in the U.S. population. Many more cases go undiagnosed or unreported, and campylobacteriosis is estimated to affect over 2.4 million persons every year in the U.S., or 0.8% of the population. Children under the age of 5 years are disproportionately affected by the disease, with an incidence rate of 29.6 cases diagnosed in 2020 per 100,000 persons in the U.S. population. Campylobacteriosis has been a nationally notifiable disease since 2014.

Per the Communicable Disease Rule R386-702-3, health care providers and laboratories are required to report cases of ''Campylobacter'' to the Bureau of Epidemiology or a local health department. The Communicable Disease Epidemiology Program assists local health departments with the investigation of cases and outbreaks and implementation of control measures to prevent further cases. Local health departments make an attempt to interview every case of campylobacteriosis reported to public health. Information gathered during these interviews includes food history, water exposure, animal exposure, outdoor exposure, travel history, and contact with ill individuals. Data from these interviews are analyzed and used to identify outbreaks and common sources of infection. In addition, patients are provided with information on high risk exposures and how to prevent future campylobacteriosis infection in themselves and their families. Some general guidelines to prevent the spread of ''Campylobacter'' include the following: *Always refrigerate meat products. Never leave raw meat at room temperature. *Always cook meat completely. *Always cook raw eggs or foods containing raw eggs well. *Avoid using unpasteurized milk. *Carefully wash hands before and after preparing food. *Always wash hands with soap and warm water after using the toilet or changing diapers and make sure children wash their hands especially after using the toilet or handling pets. [[br]] Visit [http://www.cdc.gov/handwashing/] for proper hand washing technique.

Foodborne disease outbreaks and other outbreaks are investigated primarily by local health departments in collaboration with the Utah Department of Health as needed.[[br]] [http://www.ualhd.org/] 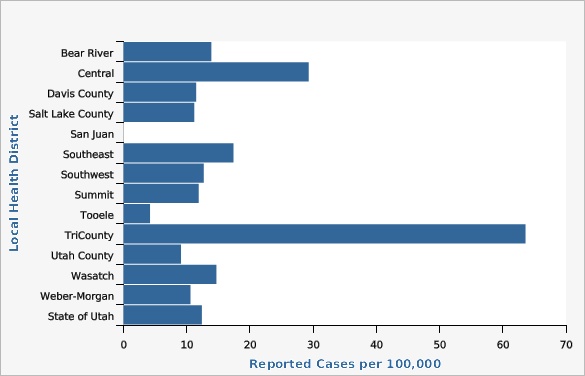 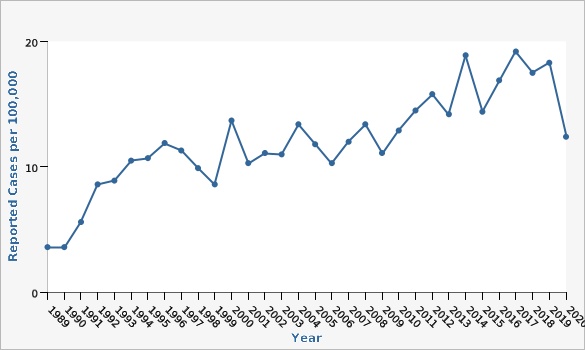 The Utah rates are derived from Utah annual surveillance reports.

Page Content Updated On 10/12/2021, Published on 02/17/2022
The information provided above is from the Department of Health's Center for Health Data IBIS-PH web site (http://ibis.health.state.gov). The information published on this website may be reproduced without permission. Please use the following citation: " Retrieved Fri, 12 August 2022 6:44:23 from Department of Health, Center for Health Data, Indicator-Based Information System for Public Health Web site: http://ibis.health.state.gov ".