Total number of persons in the population of Utah.

Falls are a leading cause of injury death for Utahns aged 65 and older. Additionally, in Utah, unintentional fall-related inpatient hospital charges for all ages totaled more than $185 million in 2014.

The Utah Department of Health Violence and Injury Prevention Program (VIPP) receives funding from the U.S. Centers for Disease Control and Prevention to collect traumatic brain injury surveillance data, including a falls-specific data module, for the state of Utah. This is done through review of hospital discharge data, vital statistics data, and hospital records abstractions. Local health departments and other community-based agencies have implemented evidence-based falls prevention programs, such as the Stepping On program and Matter of Balance program. These programs work to increase strength and balance, reduce fall hazards in the home, and build self-efficacy among participants to reduce the fear of falling. National research shows the programs reduce falls among participants. The classes are free to the public. The Utah Falls Prevention Coalition was established by the VIPP in 2011 with the purpose of developing a strategic, statewide response to the growing rate of falls among older adults in the state. Until this time, there had been no single, statewide response to address this public health problem in Utah. Many organizations were implementing falls prevention activities but resources and activities were scattered and disconjointed when looked at from a public health perspective. The Coalition has three main purposes: 1) bring together partners who have an interest in falls prevention among older adults, 2) develop goals and strategies on falls prevention among older adults to include in the Utah Violence and Injury Plan, and 3) ready the state for future funding opportunities on falls prevention.

The Violence and Injury Prevention Program (VIPP) is a trusted and comprehensive resource for data related to violence and injury. Through education, this information helps promote partnerships and programs to prevent injuries and improve public health. The goals of the VIPP are to a) focus prevention efforts on reducing intentional and unintentional injury, b) conduct education aimed at increasing awareness and changing behaviors that contribute to the occurrence of injury, c) strengthen local health department capacity to conduct local injury prevention programs, d) promote legislation, policy changes, and enforcement that will reduce injury hazards and increase safe behaviors, e) collaborate with private and public partners, and f) improve the Utah Department of Health capacity to collect mortality and morbidity data from multiple sources and conduct injury epidemiology for use in prevention planning, implementation, and evaluation.

Unintentional fall-related hospitalizations are highest among Utahns 65 years of age and older. Women are injured more often from falls than men, but men die more often from their injuries.

Risk factors for falls include older age, poor eyesight, lack of regular exercise, poor nutrition, substance abuse and smoking, and misuse of medications. Some medications can cause drowsiness or dizziness and some drugs can interact with other medications or alcohol and cause problems that may lead to falling. In addition, certain health conditions can increase the risk of falls including osteoporosis, arthritis, clinical depression, dementia, and neurological or musculoskeletal disorders like Parkinson's and Alzheimer's disease. In the home environmental hazards such as poor lighting, lack of grab bars and handrails, slippery or wet surfaces, uneven floors and surfaces, clutter, and loose throw rugs are factors in many falls.

Falls are the leading cause of death and injury disability among Utahns 65 years of age and older. Falls account for as many as 87% of all fractures and are the second leading cause of traumatic brain and spinal cord injuries among seniors. Among people ages 75 and older, those who fall are four to five times more likely to be admitted to a long-term care facility for a year or longer. Nearly one in four elderly Utahns will die of complications from a hip fracture within one year of the injury. Source: U.S. Centers for Disease Control and Prevention 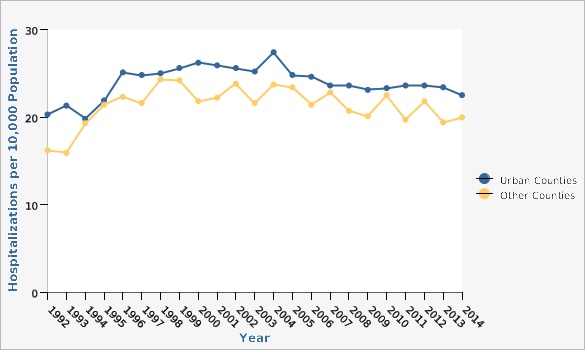 ICD-9 codes include E880-E886.9 and E888. Age-adjusted to U.S. 2000 population. County designation is based on the patient's residence and not where the fall occurred. Urban Counties include Utah, Salt Lake, Davis, Weber, and Cache. 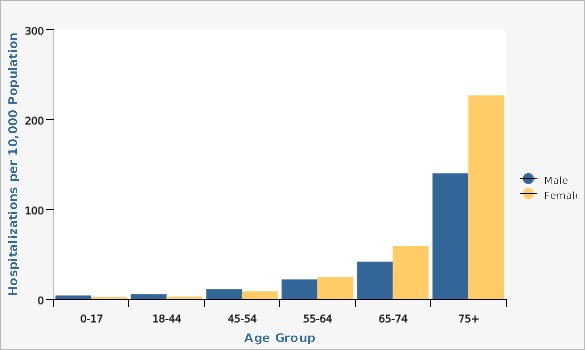 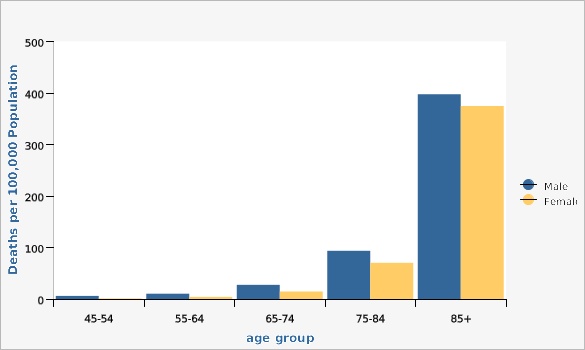 Unlike fall hospitalizations, the unintentional fall mortality rates for males ages 45 and older tend to be higher than that of females aged 45 and older. The severity of fall outcome increases as the subject gets older due to increased frailty and decreased response to environmental risks that lead to falls. With each increase in 10-year age group, the rate increases 3-4 times accordingly. 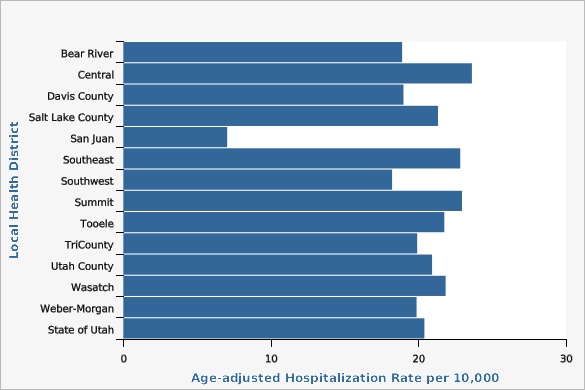 ICD-9 codes include E880-E886.9 and E888. **The estimate has been suppressed because 1) the relative standard error is greater than 50% or 2) the observed number of events is very small and not appropriate for publication.

Page Content Updated On 10/29/2020, Published on 12/23/2020
The information provided above is from the Department of Health's Center for Health Data IBIS-PH web site (http://ibis.health.state.gov). The information published on this website may be reproduced without permission. Please use the following citation: " Retrieved Tue, 28 September 2021 11:19:39 from Department of Health, Center for Health Data, Indicator-Based Information System for Public Health Web site: http://ibis.health.state.gov ".