Average (mean) time (in minutes) from dispatch of EMS to arrival at scene.

Not all EMS agencies were compliant with data collection during all years. Due to non-compliance, the data collection system contains between 50% and 98% of actual EMS responses, depending on the year (more recent years are more complete). Data may also not be reflective of true response times due to data entry errors. Data for 2016 has been updated to reflect the population descriptions for counties that the Office of Primary Care and Rural Health uses. These descriptions no longer include "sub-frontier". Data for 2016 has likewise been updated to include agencies who were reporting to the new data system and were incomplete for 2016. In 2015, five counties grew in population size and were recalculated from Sub-frontier to Frontier. These counties include Daggett, Kane, Millard, Piute, and San Juan. In 2012, population density calculations for 2000-2010 were revised based on census data. In 2008, the query for this indicator was changed as follows: * The exclusions of canceled responses and inter-facility transfers were added. * Additional data for previously reported years was received. * Each county's population density classification was calculated for each year. Previously, each county's population density classification was tied to population numbers from 2000. The new query accounts for the fact that some counties have changed population density classification during the years included in this indicator. * Each response was classified based on the county in which the incident happened. Previously, responses were classified based on the county in which the responding EMS agency was based. [[br]] The 1999-2007 data were updated to reflect these changes. The averages changed compared to those previously reported as follows: * Sub-frontier: response time increased by 2.0 minutes on average * Frontier: decreased by 1.9 minutes * Rural: increased by 0.6 minutes * Urban: increased by 0.7 minutes [[br]] Data for 1996-1998 were not updated.

Timely emergency service response can save lives of patients with life-threatening conditions such as severe injury, stroke, and cardiac arrest. The time from dispatch to arrival on the scene is an important measure of the capacity of the state Emergency Medical Services system to respond to calls for assistance.

(Developmental) Increase the proportion of persons who have access to rapidly responding prehospital emergency medical services
U.S. Target: Not applicable

EMS response times in Utah have risen slightly in recent years, with the rise being more pronounced in the least populated areas.

National response time data are available for research requests from the National EMS Database (see [http://www.nemsis.org]). Valid comparisons between a state and the nation require identical statistical coding programs including case exclusion criteria for canceled calls, interfacility transfers, and response times that are negative, zero, or greater than 60 minutes.

Information about the Bureau of Emergency Medical Services and Preparedness data systems is available at [https://bemsp.utah.gov/regulations/data/]. 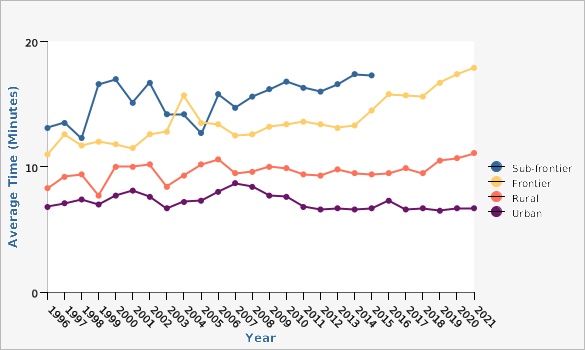 Page Content Updated On 11/21/2021, Published on 01/13/2022
The information provided above is from the Department of Health's Center for Health Data IBIS-PH web site (http://ibis.health.state.gov). The information published on this website may be reproduced without permission. Please use the following citation: " Retrieved Fri, 12 August 2022 5:26:38 from Department of Health, Center for Health Data, Indicator-Based Information System for Public Health Web site: http://ibis.health.state.gov ".