Percentage of children (age 17 and under) living in households whose income is at or below the federal poverty threshold.

Estimated number of of children (age 17 and under) living in households whose income is at or below the federal poverty threshold as defined by the U.S. Census Bureau.

Estimated number of children (age 17 and under) in the population.

Poverty status is determined by comparing annual income to a set of dollar values called thresholds that vary by family size, number of children, and age of householder. If a family's before tax money income is less than the dollar value of their threshold, then that family and every individual in it are considered to be in poverty. For people not living in families, poverty status is determined by comparing the individual's income to his or her threshold. The poverty thresholds are updated annually to allow for changes in the cost of living using the Consumer Price Index for All Urban Consumers (CPI-U). They do not vary geographically. The poverty threshold for a family of four including two children was $25,465 in 2018.

Poverty takes into account both income and family size, and has both immediate and long-lasting effects on health. Income provides an assessment of the financial resources available to individual persons or families for basic necessities (e.g., food, clothing, and health care) to maintain or improve their well-being. Persons living in poverty are worse off than persons in more affluent households for many of the indicators tracked by the Utah Department of Health. Poverty in the early years of a child's life, more than at any other time, has especially harmful effects on continuing healthy development and well-being, including developmental delays and infant mortality. Well-being in later childhood, such as teen pregnancy, substance abuse, and educational attainment, is also influenced by early childhood poverty.

Proportion of children aged 0-17 years living in poverty
U.S. Target: Not applicable; this measure is being tracked for informational purposes.

According to the American Community Survey (ACS), an estimated 11.5% of Utah children aged 17 or under (approximately 104,533 Utah children) were living in poverty in 2018. Children born into poverty are less likely to have regular health care, proper nutrition, and opportunities for mental stimulation and enrichment.

While the Utah Department of Health has no program designed to reduce the number of children in poverty, there are programs such as Medicaid and CHIP (Children's Health Insurance Program) that pay for health care for eligible children.

Being a younger or single parent increases the risk of living in poverty.

Families in poverty are less likely to have private health insurance coverage. Many children living at or near the poverty level are eligible for public health insurance programs, such as Medicaid and CHIP (Children's Health Insurance Program). 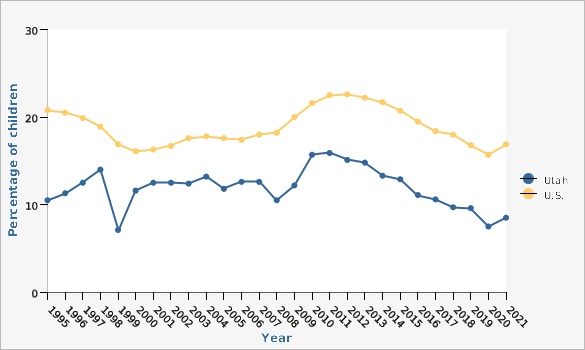 Percentage of Children in Poverty by County, Utah, 2018 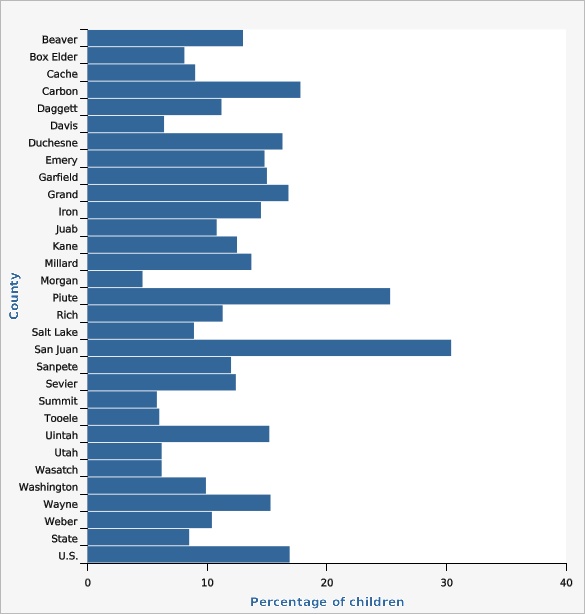 For information on how SAIPE estimates are created, please see: [https://www.census.gov/programs-surveys/saipe/technical-documentation/methodology.html]. 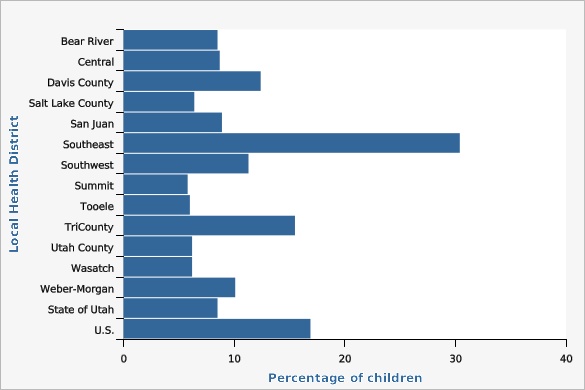 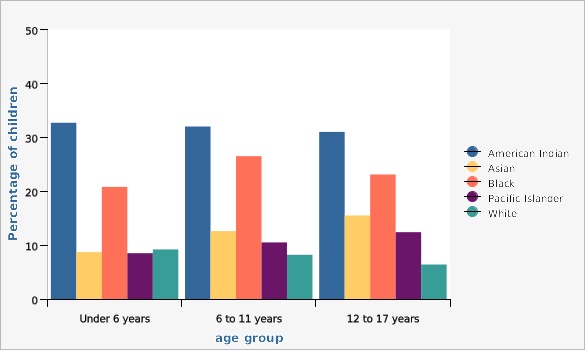 Confidence intervals are 90%. [[br]] *Small areas that are also counties use the ACS county estimate.[[br]] **The ACS uses 5-digit ZIP Code Tabulation Areas (ZCTAs) based on boundaries from the 2010 Census. Some Small Areas consist of ZIP Codes that were introduced after 2010; therefore, data are not available for these Small Areas from the ACS. [[br]] A description of the Utah Small Areas may be found on IBIS at the following URL: [https://ibis.health.utah.gov/resource/Guidelines.html].

Page Content Updated On 03/31/2020, Published on 04/28/2020
The information provided above is from the Department of Health's Center for Health Data IBIS-PH web site (http://ibis.health.state.gov). The information published on this website may be reproduced without permission. Please use the following citation: " Retrieved Wed, 23 September 2020 1:00:40 from Department of Health, Center for Health Data, Indicator-Based Information System for Public Health Web site: http://ibis.health.state.gov ".