Number of infants who turned 3 months and 6 months during the calendar year; number of mothers responding to survey.

Research indicates that women who do not exclusively breastfeed (provide only breast milk) their infants during the first six months of life, have infants who are more likely to have infections and allergies, poorer health outcomes for gastrointestinal disease, otitis media, respiratory illnesses, and atopic disease.

Increase the proportion of infants who are breastfed
U.S. Target: Not applicable, see subobjectives in this category

According to evidence-based research, the Utah WIC Program promotes exclusive breastfeeding (provide only breast milk), for the first six months of life. Incentives such as enhanced food benefits are provided to exclusively breastfeeding women up to one year postpartum. All counties across the state have an extensive Breastfeeding Peer Counselor Program (BFPCP) that provides mother to mother support and outreach to hospitals and the community. Single user breast pumps are provided free of charge to support exclusively breastfeeding working/returning to school mothers. A variety of breast pumps are offered free of charge as a loan from the program for mothers going to work or school or who are separated form their infants due to hospital interventions. Breastfeeding is supported by ongoing classes, support groups, and Breastfeeding Peer Counselors. Individualized counseling is provided from International Board Certified Lactation Consultants (IBCLCs), Registered Dietitians (RDs), and Breastfeeding Peer Counselors. The Utah WIC Program works with the Utah Breastfeeding Coalition to establish corporate or work place programs in local area businesses to help support breastfeeding families. Women need sensitive and skilled assistance in learning to breastfeed, and follow-up care should continue until their infants are breastfeeding effectively. Research indicates that optimal positioning is essential to the comfortable establishment of lactation. It is the professional responsibility of staff entrusted with the care of any mother and baby to be skilled in the basics of positioning and knowledgeable about the early signs of breastfeeding problems. It is the responsibility of institutions to validate these competencies among their staff and to routinely maintain data on breastfeeding success rates. Utah is working on these efforts and promoting use of such publications as the AAP Breastfeeding Handbook for Physicians, AAP Sample Hospital Breastfeeding Policy for Newborns, AAP Breastfeeding Residency Curriculum, and the AAP Safe and Healthy Beginnings Toolkit.

Core competencies in breastfeeding care and services were developed to provide health professionals with a guideline and framework to integrate evidence-based breastfeeding knowledge, skills, and attitudes into their standard health care delivery practices. The United States Breastfeeding Committee recommends that all health professionals possess the core competencies in order to integrate breastfeeding care effectively and responsibly into current practice and thus provide effective and comprehensive services to mothers, children, and families. Evidence suggests that breastfeeding during pregnancy, tandem breastfeeding, relactation, and induced lactation do occur and, indeed, are usual and beneficial in many cultural contexts. In addition, research indicates that many women and families lack knowledge of the basic skills of breastfeeding, and breastfeeding is an art lost in some cultures (including the U.S.) due to recent decades of the introduction of artificial infant formula, infant bottle-feeding, and the cultural misrepresentation that this is the norm. Studies show that many infant food and equipment companies market their products in ways that affect women's choices about infant feeding. The International Lactation Consultants Association (ILCA) proposes that the International Code of Marketing of Breast-milk Substitutes be considered a minimum standard for assessing industry marketing practice. Evidence indicates that, in general, disease rates are higher in child care institutions than in family homes. The ILCA believes that the provision of maternal breast milk for infants in child care is to be encouraged, and that child care workers should be educated in its value, its care, and its use. Other research findings and informed evidence reveal the following: *breastfeeding prevents more births worldwide than all other means of contraception. *the woman who is exclusively breastfeeding and amenorrheic is at very small risk of conception in the first six months after birth. *women should be informed about the fertility reducing effects of breastfeeding. *contraceptive methods offered to the lactating mother should be compatible with continued lactation. *women who do not breastfeed may be in an abnormal postpartum hormonal state. *education for health professionals has not dealt adequately with either normal lactation or its problems. *women needing special assistance with breastfeeding should be referred to an appropriate individual, institution, or agency. *lactation should be included in the basic curricula of all maternal and child health education programs and should be taught by knowledgeable persons familiar with current research and management practices.

Utah is working to help promote, protect, and support breastfeeding by following evidence-based practices and the recommendations of the American Academy of Pediatrics (AAP), the World Health Organization (WHO), the U.S. Surgeon General's Call to Action and the Centers for Disease Control and Prevention (CDC). The American Academy of Pediatrics Policy Statement, Breastfeeding and the Use of Human Milk (March 2012) states: Breastfeeding and human milk are the normative standards for infant feeding and nutrition. Given the documented short- and long-term medical and neurodevelopmental advantages of breastfeeding, infant nutrition should be considered a public health issue and not only a lifestyle choice. Hospital routines to encourage and support initiating and sustaining of exclusive breastfeeding should be based on the AAP-endorsed WHO/UNICEF Ten Steps to Successful Breastfeeding. National strategies supported by the U.S. Surgeon General's Call to Action, CDC, and The Joint Commission are involved to facilitate breastfeeding practices in U.S. hospitals and communities. Pediatricians play a critical role in their practices and communities as advocates of breastfeeding and should be knowledgeable about the health risks of not breastfeeding, the economic benefits to society of breastfeeding, and the techniques for managing and supporting the breastfeeding dyad. Growth patterns for monitoring in the first two years of life should use the WHO's standard growth charts that represent standards of growth patterns of healthy term breastfed infants. Growth charts that reflect infants fed on artificial infant formula are not accurate in measuring growth. The American Academy of Pediatrics role of the pediatrician includes: # Promote breastfeeding as the norm for infant feeding # Become knowledgeable in the principles and management of lactation and breastfeeding # Develop skills necessary for assessing the adequacy of breastfeeding # Support training and education for medical students, residents, and postgraduate physicians in breastfeeding and lactation # Promote hospital policies that are compatible with the AAP and Academy of Breastfeeding Medicine Model Hospital Policy and the WHO/UNICEF Ten Steps to Successful Breastfeeding # Collaborate with the obstetric community to develop optimal breastfeeding support programs # Coordinate with community-based health care professionals and certified breastfeeding counselors to ensure uniform and comprehensive breastfeeding support[[br]] [[br]] The American Academy of Pediatrics' Recommendations on Breastfeeding Management for Healthy Term Infants include exclusive breastfeeding for about 6 months, followed by continued breastfeeding as foods are introduced, with continuation of breastfeeding for 1 year or longer as mutually desired by mother and infant. Peripartum policies and practices that optimize breastfeeding initiation and maintenance should be compatible with the AAP and Academy of Breastfeeding Medicine Model Hospital Policy and include direct skin-to-skin contact with mothers immediately after delivery until the first feeding is accomplished; delay in routine procedures (weighing, measuring, bathing, blood tests, vaccines, and eye prophylaxis) until after the first feeding is completed; ensure 8 to 12 feedings at the breast every 24 hours; ensure formal evaluation and documentation of breastfeeding by trained caregivers; give no supplements (water, glucose water, commercial infant formula, or other fluids) unless medically indicated using standard evidence-based guidelines for the management; avoid routine pacifier use in the postpartum period and until breastfeeding has been established; all breastfeeding newborn infants should be seen by a pediatrician at 3 to 5 days of age; evaluate hydration (elimination patterns) and body weight gain; assess feeding and observe feedings; and mother and infant should sleep in proximity to each other to facilitate breastfeeding.

Breastfeeding for at least 6 months is more common among women who are White or non-Hispanic Asian, college-educated, and not enrolled in WIC. Mothers are more likely to continue to breastfeed beyond the newborn period if they are not employed outside the home, or if they work part-time. Employers are encouraged to implement workplace policies to protect and support breastfeeding mothers. Mothers are encouraged to discuss this with their employers.

Infants not breastfed for at least six months are at increased risk for gastrointestinal illness, ear infections, diabetes, childhood and adult obesity, and other acute and chronic diseases. 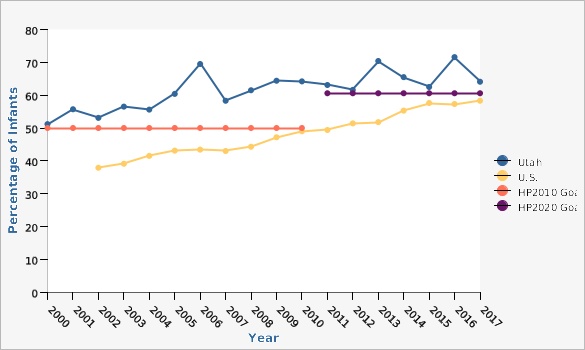 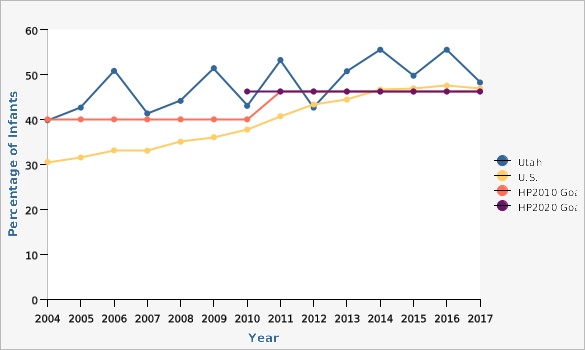 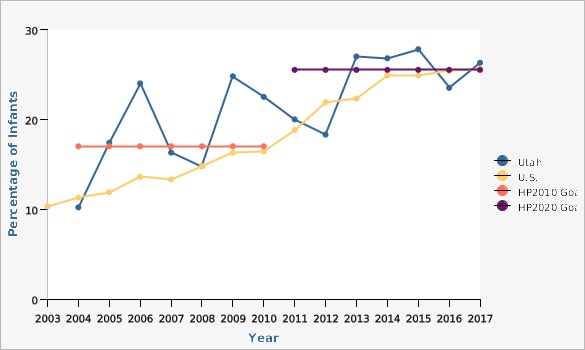 Page Content Updated On 10/03/2019, Published on 10/29/2019
The information provided above is from the Department of Health's Center for Health Data IBIS-PH web site (http://ibis.health.state.gov). The information published on this website may be reproduced without permission. Please use the following citation: " Retrieved Sat, 28 November 2020 10:56:25 from Department of Health, Center for Health Data, Indicator-Based Information System for Public Health Web site: http://ibis.health.state.gov ".